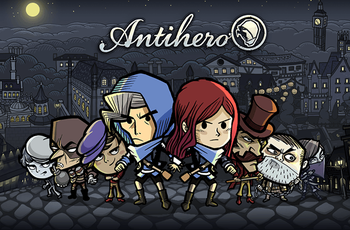 Antihero is a Turn-Based Strategy game, developed by Tim Conkling and published by Versus Evil, and which came out on Steam and GOG.com on 10th July, 2017, before being ported to IOS devices on January 2nd, 2018.

This game is set in the ersatz version of the Victorian London, and is devoted to running a Thieves' Guild. There's both a story-driven campaign, the various skirmish scenarios played against the AI, and the multiplayer, which can even be played via email.