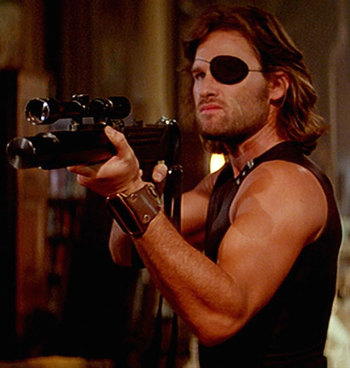 Snake Plissken is a decorated Special Forces soldier/war hero who turned to a criminal life after feeling he was betrayed by his country. As the original film begins, he is arrested for his role in an attempted robbery at the U.S. Federal Reserve, and is conscripted into helping rescue the President in exchange for a full Presidential pardon, under threat of an Explosive Leash.

He later enacts a second suicide mission 13 years later, when he is conscripted by a fundamentalist President to retrieve the launch controls for the "Sword of Damocles", a superweapon that can shift the balance of power in his favor, as well as assassinate his rebellious daughter, Utopia. 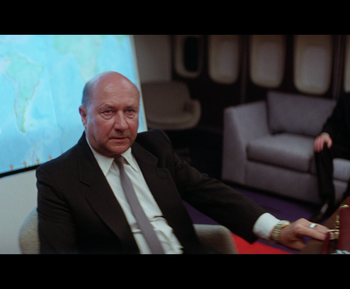 "This nation appreciates their sacrifice."

An unnamed President who is travelling to a global summit on Air Force One when it's commandeered by terrorists who take over the cockpit. He uses an Escape Pod to eject into New York City before the plane crashes, and is subsequently captured by The Duke and his men, forcing Bob Hauk to enact a rescue mission to save him with Snake's help. 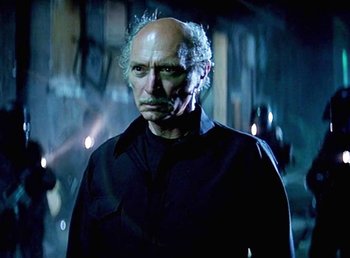 The Commissioner of New York City's police force, stationed at Liberty Island. After the President's Escape Pod crashlands in New York, Hauk conscripts Snake to undertake a rescue mission within 22 hours, under threat of an Explosive Leash. 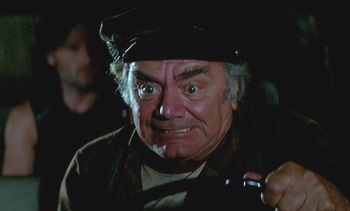 "I've been driving a cab here for 30 years and I'm telling you -- you don't walk around here at night!"

A mild-mannered, happy-go-lucky resident who voluntarily stayed behind in Manhattan when it was turned into a prison, and has had a long-running career as a cab driver. He encounters Snake in a theater and becomes a chauffeur for him, eventually getting involved in the plot to rescue the President. 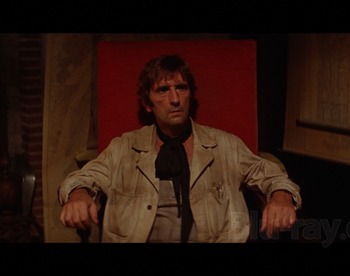 An acquaintance from Snake's past who fled from a job, they once again cross paths in New York City. This time, though, "Brain" works for the Duke and helps pump oil from the ground in order to fuel his convoy. He reluctantly takes part in Snake's plan to rescue the President. 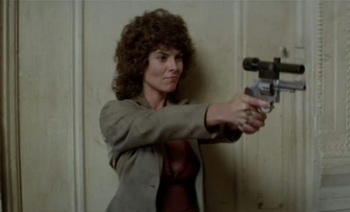 "Harold? You never told me you knew Snake."

Harold "Brain" Hellman's wife, who lives with him at the New York City Public Library. She proves to be a crack shot with a gun and assists the group as they try to escape from the city with the President. 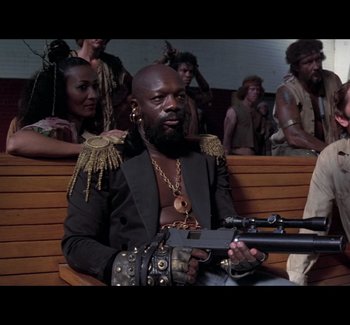 "They sent in their best man, and when we roll across the 59th Street bridge tomorrow, on our way to freedom, we're going to have their best man leading the way - from the neck up! On the hood of my car!"

The most feared man in New York. The Duke runs a gang with an iron fist, and runs afoul of Snake when the latter attempts to rescue the President by himself soon after arriving in the city. The Duke plans to escape from the city with his gang by any means necessary.

The Duke's right-hand man, Romero is rarely seen without the Duke and follows his orders without question. He is the one who reveals to Hauk that the President has been captured, thus kicking off the latter's quest to bring him back with Snake's help.

An unnamed resident of New York who Snake meets while hiding from the Crazies in the Chock Full O'Nuts shop. She gives him some information about the city and the current situation.

A long-time companion of Snake, Bill Taylor is involved in a botched robbery on the U.S. Federal Reserve that results in Snake getting arrested and sent to New York for incarceration. The scenes including Taylor were filmed, but ultimately deleted, from the final cut of the film.

Characters featured in the comic series produced by Boom! Studios:

The Twins
The "Twins" (a.k.a. Romulus and Remus) control the state of Florida and have fashioned it into a free state... despite only being 13 years old. They attempt to enlist Snake to help them invade the U.S. and claim it for themselves.
Meemaw
The protector of the mouthy Twins, Meemaw is a no-nonsense Mama Bear who protects the boys at any cost.
Jayne
A Satanist (claiming to be a missionary) who accompanies Snake during his journey to Florida.
Sadie
A resident in Cleveland who joins Snake's gang as they decide to raid a Federal Vault, and eventually gets roped along in Snake's quest to escape the U.S. Police Force.