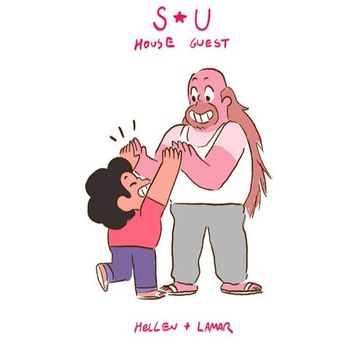 At "It's A Wash," Greg's car wash, the Gems have returned his van, busted after their fight with Lapis Lazuli. Pearl inspects the van, convinced that since it's just a simple Earth machine, she can fix it. Greg, whose leg was also broken in the fight, rolls up in a wheeled office chair and extols the virtue of duct tape to fix any and everything. In lieu of going to the hospital, Greg has even duct taped a ruler and a twig to his leg as a splint.

The discussion turns to Greg's injury. Steven suggests his father live with them until he's better — which alarms Pearl, who enthusiastically agrees with Greg that his presence might interfere with Steven's training. Amethyst reminds Steven of his healing powers; Pearl suggests he try that. Steven licks his hand then puts the sparkling spit on his father's leg. Greg tries to stand, but flops back into his seat in pain; the healing didn't work! Steven is upset since he thought he was finally getting the hang of using his powers at will. Garnet offers him reassurance, and they bring Greg home.

Steven, who clearly feels guilty that Greg got hurt for going on a mission, and guilty that his healing power didn't fix Greg's leg, goes all out to make Greg comfortable. He cooks for Greg, and they sing together on the beach.

Garnet announces a mission: a geode has cracked and the Gems must go to repair it. Steven is willing to stay behind with his father, but Garnet says he's needed. Greg voices worry about what he will do if he needs something.

Greg: Don't worry about your old man. My leg's not going to get any more broken. If I need something, I guess I'll just ... crawl. My arms aren't broken.

Pearl produces a magical item to set Greg and Steven's minds at ease: the warp whistle. All Greg needs to do is blow it, and it will activate their warp pad, letting them know he needs something. With that, they leave. Pearl begins to explain the problem but the whistle sounds. Steven returns to find his dad just wanted to make sure it worked. Steven gets back to the mission but before Pearl can complete her explanation, Greg blows the whistle again so Steven can find the remote. Steven returns to the mission again. Garnet suggests that he uses his healing powers to fix the crack in the geode, but to his dismay, his healing spit doesn't work on it! The Gems offer him more reassurance, even as Greg blows the whistle again.

Steven rushes home to find Greg sprawled upstairs, with his eyes closed and the whistle dangling from his mouth. Steven tries desperately to wake his father. Greg wakes, apparently from a little doze, and tells Steven he missed a funny commercial. Steven becomes frustrated and reminds Greg he's only supposed to use the whistle if it's important. Greg apologizes and asks Steven to get him a snack from Big Donut. The other Gems have returned for the moment, while they seek alternative ways to repair the geode. Amethyst tells Steven to bring her a croissant before the Gems go into the temple. Steven realizes he forgot to ask Greg what he wanted, and returns to the house... to find Greg standing up just fine on both feet, dancing in the kitchen as he fixes himself a snack! Greg tries to dodge by talking about how he can still dance, then tries to distract by pointing out he was too hungry to wait for the snack. Then he gives up and falls over, as if his leg was suddenly paining him again.

Greg admits that the healing spit worked, but that he hadn't wanted to miss an opportunity to live with and spend time with his son. Steven, on the other hand, is very upset. His father's little lie damaged Steven's self-confidence, and now Steven's afraid that his powers don't work at all. Greg tells his son not to beat himself up, and says it's his fault. Steven agrees that it's Greg's fault and storms out of the house. It's only seeing his ukulele next to Greg's guitar that helps Steven calm down and consider his father's admission.

When he gets back this time, Greg has picked up his tool box and the warp whistle, determined to take responsibility for the mission having failed earlier. Steven comes along, hearing Greg describe that he has to do his part to fix the problem he made worse by lying. Steven tries again after a pep talk from Greg to heal the geode, but it still doesn't work. However, Greg's duct tape manages to do the trick, sealing the geode so the storm dissipates — at least for a while.

Later, Pearl gives a detailed list of all the repairs she has done on the van, and a grateful Greg parks it close enough to the house that he and Steven can call goodnight to each other.

And we Iris Out with two hearts over the temple house and Greg's van!