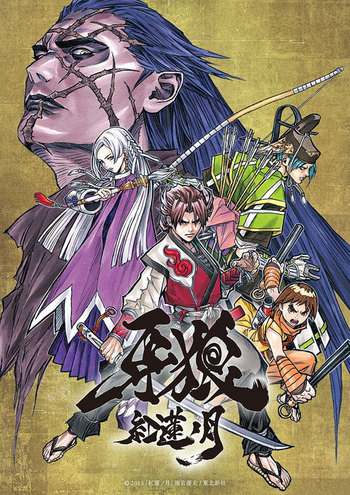 GARO: Crimson Moon (Or, in Japanese, GARO: Guren no Tsuki) is the second animated entry in the GARO franchise, serving as prequel to GARO: Carved Seal Of Flames animated by MAPPA and written by Yasuko Kobayashi.

In Heian-Era Feudal Japan, a trio of secret warriors stand against monsters called Horrors that prey on people in the night. The current bearer of the GARO Armor, Raikou, (aided by his young attendant Kintoki) must rely on the Jerk with a Heart of Gold Makai Alchemist Seimei to help him don his armor, as he is unable to wear it on his own due to a seal placed upon him.

Spikes in Horror activity have put the Light Palace and it's retainers on-edge. These spikes are soon traced to a dark curse-bearer known as Ashiya Douman, who manipulates the downtrodden and spiteful into becoming Horrors to do his bidding.

As the trio fight, hints of a larger scheme begin to unravel. Not helped is Seimei herself, who also has things to hide....

Garo: Crimson Moon is avaliable on DVD as well as freely avaliable for simulcast on Funimation. It's followed up by the 2017 sequel Garo: Vanishing Line.