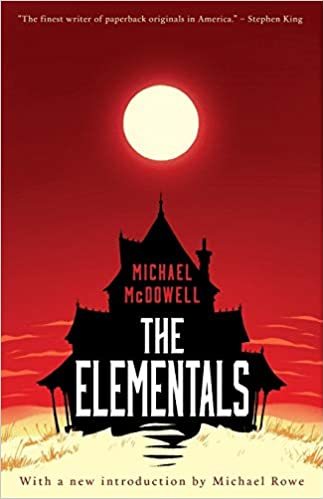 The Elementals is a 1981 Southern Gothic horror novel by Michael McDowell, most known today for writing the screenplay for Beetlejuice and two of the three segments of Tales from the Darkside.

The matriarch of the wealthy Savage family, Mariam Savage, has died. Her son Dauphin and his wife Leigh, along with the family's lifelong African-American servant Odessa and Leigh's mother "Big" Barbara McCray, brother Luker, and niece India, decide to spend some weeks after the funeral at Beldame, a vacation spot on the Gulf Coast owned jointly for generations by the Savage and McCray families that consists of three identical Victorian houses on an isolated beach that becomes an island at high tide.

Of the houses, one is owned by the McCrays, one by the Savages, and the third...well, that's something of a mystery. The third house has been seemingly unoccupied for as long as anyone remembers. Not only that, but it's slowly being swallowed up by a massive sand dune. Something does live there, though. And that something has long been involved in the tragic history of the Savage family, and it's not done with them yet...

The Elementals contains examples of the following tropes: