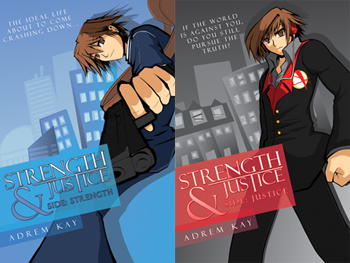 Strength & Justice is a Young Adult Science Fiction story self-published by two authors going by the pseudonym Adrem Kay. It is elaborated over three books; the first and the second are titled "Side: Strength" and "Side: Justice" respectively. The third book, yet to be published, remains unknown.

In a distant future in a city called Geminate, where people have superpowers known as "dynas", 15-year-old Jeremy Itsubishi, a high school student who must juggle school life, socialising and working as a cadet for a law enforcement organisation called DANDY in the distant future. He is faced with missions concerning a strange illness that have been affecting the population's magical powers simply known as the "repulsion illness". At first, he doesn't think much of it and tries to focus on his school life first and foremost. But as time passes, people close to him become infected with the illness and lose their magical powers, until he finally decides to go and seek the truth for himself - the truth behind the illness and, most likely, behind the very organisation he works for.

There will be hungry unmarked spoilers below. Proceed with caution.

The two books provide examples of: