For tropes and descriptions that apply to Code Lyoko: Evolution, please refer to its character page. 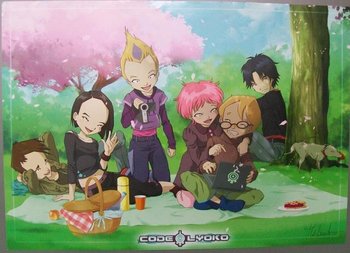 A quiet and introverted person by nature, quite the opposite of his best friend, Odd. Headstrong and stubborn, he cares for his friends and would do anything for them. Ulrich is more athletic than academic and it shows when you compare his grades to his sports performance. He attracts the attention of many females of the school, but has obvious feelings for Yumi. He manifests in Lyoko as an unarmored samurai, with the ability to "Triplicate" into three of himself, and Super Speed. His katana can deflect XANA's creatures' energy attacks. 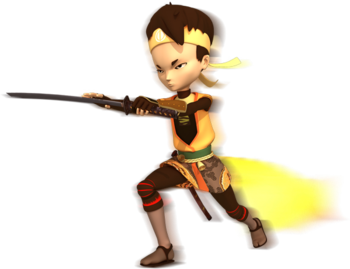 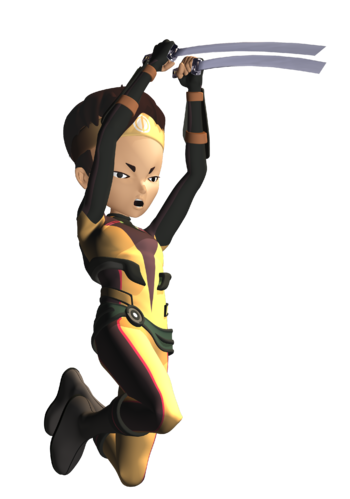 The only extravert of the Team, and an incorrigible smart-aleck. He dresses in flashy, clashing colors, mostly purple and yellow. Though physically petite compared to the rest of the team, he is an adrenaline junkie, just the type to go for extreme sports. Also a passable student; his strengths are in the languages and artistic classes. He's a big flirt who's dated about every girl in his grade (most of them for only a day or two) as well as a few others. He has smuggled his small dog, "Kiwi", into the dormitories. In Lyoko, his avatar is a Cat Boy version of himself, including claws and a tail. He has heightened agility and stamina in this form, and can shoot "Laser Arrows" from his forearms — which, for a time, tended to run out of ammo at the worst possible moments. This shortage was resolved in Season 2 at the expense of another of Odd's powers, the "Future Flash" which offered spontaneous visions of the mostly immutable immediate future. This left Odd with the short end of the stick powers-wise, a fact lampshaded in Season 3's "Triple Trouble" when Jérémie tries to give Odd a teleportation ability, but ended up making two clones for him instead, and the clones wind up not disappearing when no longer needed. At least he still has a marginally useful energy shield, granted as part of the Season 2 power realignment. 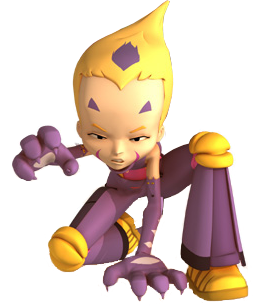 The tallest and oldest of the group, alongside William. A good student, she is a Japanese national at the boarding school, living off-campus with her family. She is one grade above the rest of the Team, which proves sometimes problematic. While she may have feelings for Ulrich, Yumi is exasperated by his inability to articulate his crush. Her virtual form is a geisha with a collapsible razor-edged fan, with which she can deflect energy bolts. The fan can be thrown as a ranged weapon, returning to her hand after an attack. Yumi also exhibits telekinetic power over several objects of the Lyoko landscape — most often boulders in the Mountain or Desert sectors. A running joke among fans is XANA's tendency to single her out for attack. 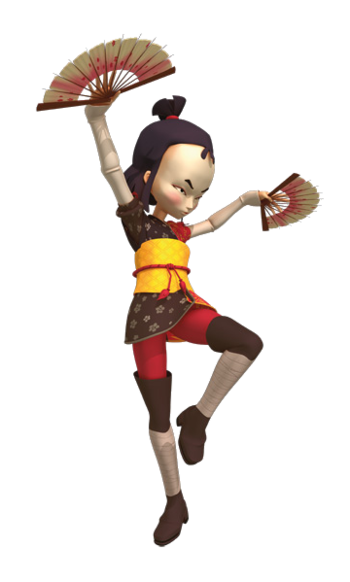 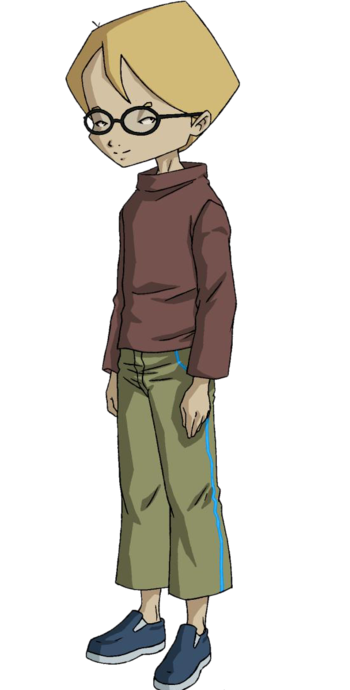 Jérémie is the computer genius whom operates the Supercomputer and allows the interface. He's also the leader of the Team, and shows good tactical skills even under pressure. As the most level-headed, he keeps the infighting within the group to a minimum. He can even get a bit authoritarian, despite being the youngest. Jérémie is one year younger than Ulrich and Odd, having skipped a grade. He has more than a crush on Aelita, and it's largely this motivation that keeps the Team going in time after time to shut XANA down. Though he has been virtualized twice, this has never been done on camera — something of a Lampshade Hanging on the second occasion.

Aelita started out as the Damsel in Distress in the series. Unlike the other characters, she seemed to have originated on Lyoko, and survived there for years. The first season of the show deals with Jérémie and the Team trying to figure out a way to materialize her into the real world. She originally had two special abilities in Lyoko: she could enter the access towers that XANA uses to interface with the real world and shut them down, and she had the ability to morph the virtual landscape around her to create walls, rockslides, etc. Starting with Season 3, she was no longer in danger of being killed if losing all her Life Points. She gained the ability to attack with spheres of energy as well, and obtained wings in Season 4 with her new outfit. 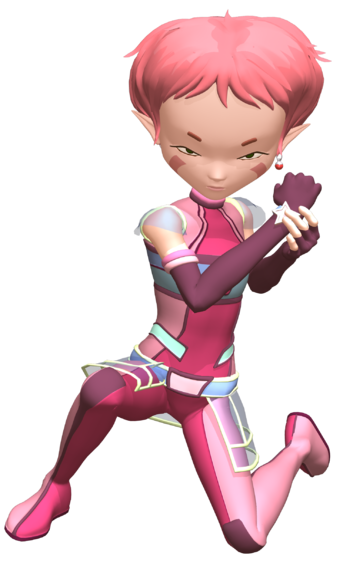 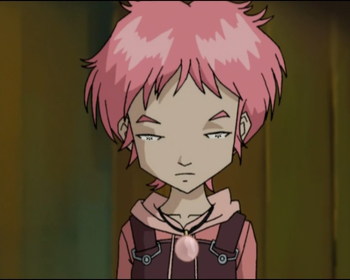 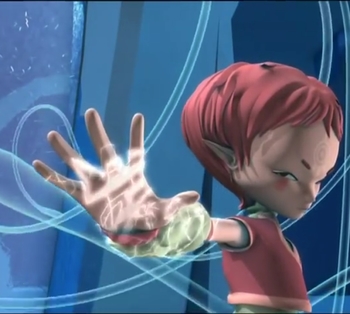 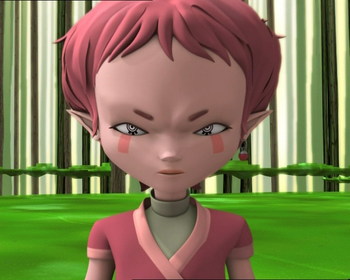 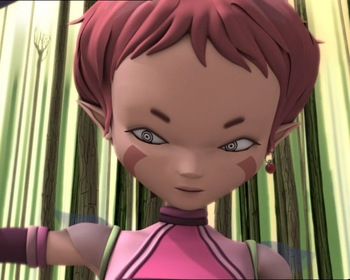 Exactly What It Says on the Tin, Aelita whenever she is brainwashed by XANA, which has happened enough for its own section.
Advertisement:
William Dunbar

A transfer student exiled to Kadic Academy in Season 2 for spamming love notes. His primary function during the first half of his tenure is to act as a Romantic False Lead for Yumi and lampshade Ulrich's inability to spit it out in the process. William's assistance in foiling several of XANA's schemes on the real-world side proves critical in Season 3, though, and after he confides to the Team that he is starting to dream about elements of his adventures that should have been erased with the Return to the Past, the Lyoko Warriors reluctantly (but unanimously) take him on as their newest member. It goes downhill from there. Mind-controlled by XANA (and stripped of his higher vocabulary in the process), William spends the majority of Season 4 as the Lyoko Warriors' most consistent virtual threat. He gets better, but the show ends two episodes later, and on kind of a harsh note for him. 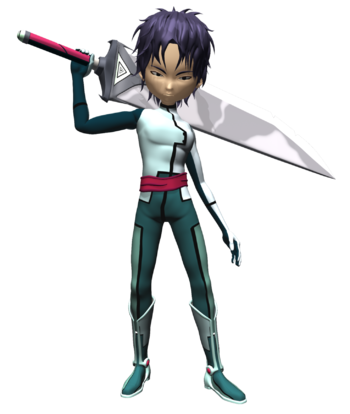 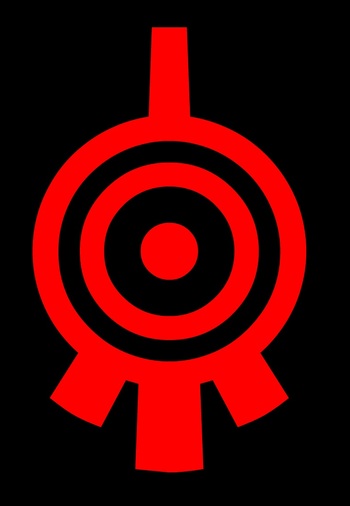 This malevolent A.I. is the main antagonist. Created by Franz Hopper to counter "Project Carthage", he rebelled against his creator and was sealed in the Supercomputer some 10 years before the start of the series. His true motivations are unknown, but he is hostile to humanity, and to the Lyoko Warriors in particular. He regularly attacks the real world through the Lyoko Towers. Being a program, he has no definite shape and manifests through the ever-present logo (or Eye of XANA) and the monsters on the Lyoko Sectors. He tries to escape the Supercomputer throughout Season 2 so that the heroes can no longer defeat him by cutting the juice, and after doing so he attempts to conquer the world in Season 4 by creating an army of robots. 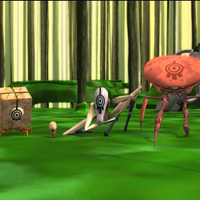 Polite, efficient, deadly... for the most part.
Lyoko Monsters

The dozen or so models of virtual monsters that XANA uses to defend activated towers and other important locations on Lyoko: 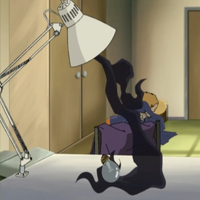 Will not disrupt household appliances.
Specters

Artificial smoke-beings created by XANA through an activated Lyoko Tower to cause havoc on Earth. At first they were only able to take control of inanimate objects or machines, but as XANA gained in power they started taking over animals or even humans. The possessed ones (often labeled as "XANAfied") can be recognized by the XANA symbol in their eyes. The Specters confer them some special powers, like Nigh-Invulnerability (they can still be knocked out if taken by surprise, and are vulnerable to electricity or EMP), Super Strength, Wall Crawl, Shock and Awe... and others as the series progresses. Alternatively they can control many animals or people, but then fewer special powers are gained because XANA's energy is diluted. 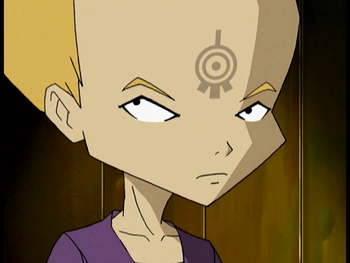 One of many Earth appearances. Click here to see his Odd appearance on Lyoko 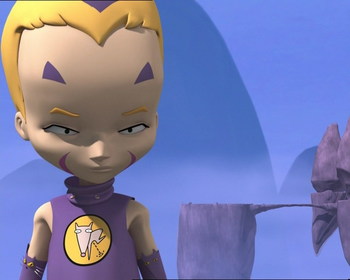 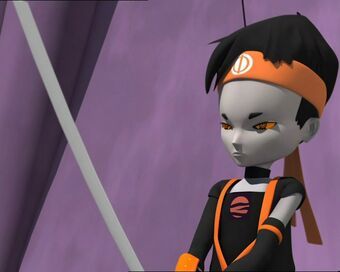 An advanced form of XANA's Specters, the Polymorphic Clones have no need for a host and can take a human shape by themselves. They can copy many appearances, most often of the Lyoko Warriors or some adult to sow division or attack by surprise. They have the same powers as a XANAfied human with the addition of shapeshifting. They solely appeared on Earth, with the exception of one going to Lyoko through a scanner by replacing Odd in the episode "Revelation". Jérémie mastered the technology in Season 4 to create a short-lived clone of himself, and then a replacement for William. Both of Jérémie's clones, however, have a strange programming flaw: their personalities are partially inverted compared to the originals. The Jérémie Clone is an insufferable Odd-like Kid-anova, while the William Clone is dumb as a sack of bricks. 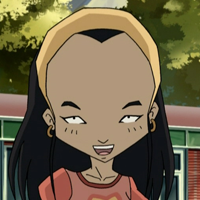 Daughter of Kadic Academy principal Jean-Pierre Delmas. She can have practically any boy at school — but she wants Ulrich, who'd rather have nothing to do with her despite (or maybe because) they'd known each other since childhood. To separate Ulrich from Yumi (not that they're actually together, honest), Sissi makes a variety of attempts to undermine the bonds of friendship between the Lyoko Warriors. These often manifest as attempts to administratively separate them through her power as a one-girl Absurdly Powerful Student Council or the use of blackmail material to buy her way into the group. Either way, she has the potential to sow a greater division than XANA himself. The prequel two-parter "XANA Awakens" reveals that she had initially been in on the Lyoko Warriors' secret, but her memories of the Supercomputer's activation were wiped with a RTTP because she notified her father due to thinking her friends were in danger and a misunderstanding of betrayal occurred. Hints dropped from late Season 2 and through Season 4 seem to reinforce Fanon that Sissi could be perfectly content with Odd — so long as she doesn't realize it's a Bohemian like him that she connects with. 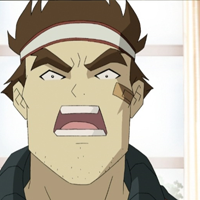 The Gym teacher and dormitory supervisor at Kadic Academy. A bit overweight and prone to speeches full of redundancies and malapropisms, he's most often the comic relief. But when things get dangerous he can prove extremely courageous and fiercely protective of the children. Jim is sometimes the butt of the students' practical jokes, and as a result can be overly severe toward them. He's very suspicious of Team Lyoko, and ends up discovering the Factory several times, to have his memory erased by the Returns to the Past. Starting with Season 2, whenever appropriate to the situation, his shtick is to mention one of the many jobs or hobbies he's supposed to have done in the past, from sewer worker to astronaut... Though some of these might be true, most are probably wild exaggerations, as suggested in the episode named for his Catchphrase. 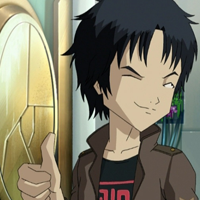 A Polymorphic Clone created by Jérémie to replace William throughout season 4 while the latter is controlled by XANA, so that nobody at Kadic gets suspicious from his prolonged absence. The clone is close enough from the original to fool most people, although his programming isn't quite perfect, making him a Literal-Minded Ditz — and a big source of humor. Milly and Tamiya discovers something is amiss in episode "A Lack of Goodwill", and William's parents quickly find out he's an impostor (in episode "Down to Earth"), just before William's return. 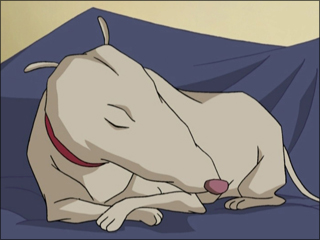 Odd's dog, which he brought secretly in Kadic and now hides inside his room with the help of Ulrich, since pets are forbidden at school. Kiwi tends to not do much besides eating, sleeping and in some occasion wreaking havoc in the room. Odd, however, is devoted to it. 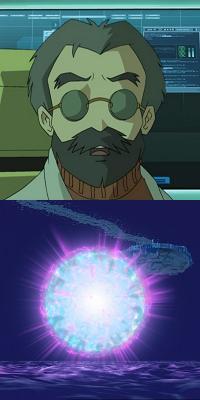 Aelita's father, the creator of the Supercomputer, Lyoko and XANA. Also a former Science teacher at Kadic Academy. 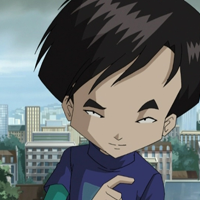 Yumi's younger brother, appearing in Season 2 and joining the 6th grade at Kadic at the start of Season 3. He shows some hero-worship toward Ulrich, and constantly hounds his sister to date the Stern boy and admit her feelings for him. A bit of a crook, he often blackmails Yumi into doing his homework in exchange for not tattling to their parents when she's out saving the world. Unwittingly tagging along in some of XANA's attacks, he tends to be a dangerous distraction (in "A Bad Turn"), but also shows some useful skills (like picking locks in "Hot Shower"). He never keeps memories of this thanks to the Returns to the Past.