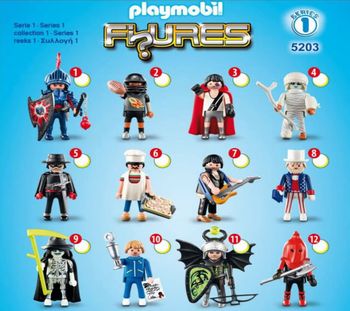 The male half of the first series of figures.
Advertisement:

Playmobil Figures (stylized as "Fi?ures") is a toy line by Playmobil. It is similar to LEGO Minifigures, as the series consist of several blind-bagged assorted characters. The key difference between the two companies' approaches is that each series in the "Fi?ures" line has two subseries, one of 12 male characters, and one of 12 female characters. This gives each series more characters while making it easier to search for a specific character.

Tropes in the the Fi?ures theme include: