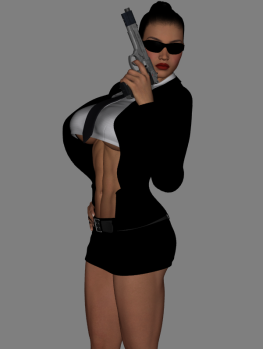 Maia combines the Pistol Pose with a Boobs-and-Butt Pose.
Target of Desire: Episode 1 is an action-adventure game released in 2017 by Osgoode Media for Android, Windows Store and Tizen. It's the first episode in the Target of Desire

Target of Desire is the story of 2 characters: Maria and Maia.

Maia is an action girl who is trying to survive a seemingly endless supply of bad guys, while trying to discover who they are and why they're after her.

Maria is a lovable nerd, who works at a University. She blogs under the name of "I am named Maria", and speculates about the nature of reality.