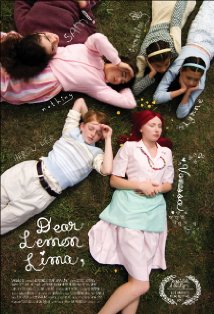 Sometimes fitting in is about standing out.
Advertisement:

Dear Lemon Lima is a 2009 family comedy about a girl who attempts to screw with the system after being awarded a scholarship to an exclusive private school in Alaska based on widely stretched racial interpretations. Helping to motivate her are her lingering feelings for her ex-boyfriend-turned-rival team captain for the school's big annual physical competition and the treatment she sees of students exiled to the "Weight Room," a bunch of miserable loners who have trouble fitting in whether at school or at home. Rather than whip them into shape, she attempts to show the school that they're a collection of plucky Cool Losers capable of winning on without having to change who they are.