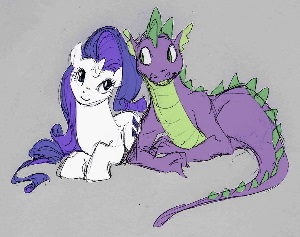 A Lady and her Dragon

Rarity may be prim and proper, but all those gems for her dresses don't dig themselves up. So, Rarity begins another trip to collect all the gems she can find using her special jewel-detecting spells, and hits a motherlode of beautiful gems in a secluded cave.

Unfortunately, said jackpot belongs to somebody already; Greenfire the dragon, and he is not happy that Rarity is about to steal his carefully-collected hoard. Thinking fast, Rarity talks her way out of the situation by pointing out how rude it would be to eat her. However, Rarity eventually finds something worth much more than even a year's worth of gems, and that's the wonderful friend (and romantic interest) that is Greenfire himself.

This My Little Pony: Friendship Is Magic Alternate Universe Fic by True Blue Spark can be found here