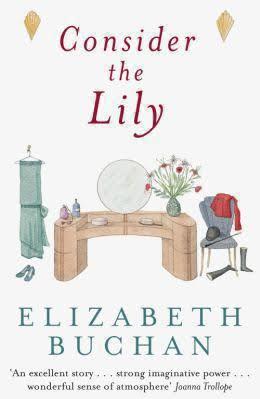 Cover of the novel on Goodreads
Consider The Lily is a novel by Elizabeth Buchan, published in 1993. The story is centered on Matty Verral, a stubborn and insecure heiress, her cousin Daisy Chudleigh, and Kit Dysart, the handsome but penniless heir to Nether Hinton.

The novel begins in 1929, when Matty and Daisy attend the wedding of Kit's older sister Polly. Kit and Daisy become enamoured with each other, and get closer during a holiday in France. Matty is also in love with Kit, and on the return journey to England she asks him to marry her. In dire need of money, Kit reluctantly accepts. Daisy is furious, and Kit is resentful of relying Matty's fortune.Trapped in a loveless marriage with Kit, Matty begins to focus on improving the garden, and becomes obsessed with the death of Kit's mother. Daisy's life begins to slowly fall apart, and Kit begins to realise that his selfishness could ruin his life.