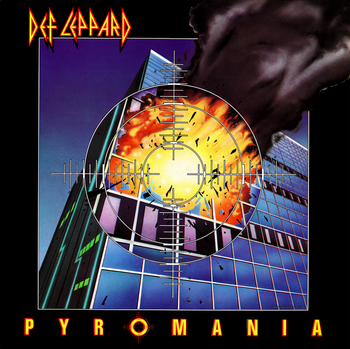 We got the power, got the glory
Just say you need it and if you need it
I'm outta luck, outta love
Got a photograph, picture of
Passion killer, you're too much
You're the only one I wanna touch

I see your face every time I dream
On every page, every magazine
So wild and free, so far from me
You're all I want, my fantasy
"Photograph"
Advertisement:

Def Leppard was beginning to find their audience on the opposite side of the pond, as High 'n' Dry got them a Billboard Mainstream Rock chart hit (#34) with "Let It Go". Their sound was solidifying, as the genesis of Glam Metal was at hand.

Of course, there was one problem, which was a big problem throughout the movement: alcohol abuse. And toward the end of their recording, it claimed guitarist Pete Willis, who was fired for his excessive alcohol abuse.

Later, Willis would admit that getting fired likely saved his life.

He was replaced by Phil Collen, who completed the album with the band, though most of Willis' work was preserved.

The album would be the band's breakthrough. David Fricke of Rolling Stone, who rated Pyromania 4 out of 5 stars, praised the work as putting "much-needed fire back on the radio", and characterized the music as sophisticated, and more emotionally charged than most of the synthesized disco that passes for 'modern music'". The implication Fricke tried to make was that the band was far more genuine than most Pop music of the moment. AllMusic rates the album at 5 out of 5 stars.

Fans were drawn in by the new movement. The album peaked at #2 on the Billboard 200 album chart—yet another album blocked by Michael Jackson’s Thriller—and #19 on the Original Charts Company album chart. It was certified ten-times Platinum (later Diamond) by the RIAA, and Silver by the BPI.

The album produced four singles: "Photograph", "Rock of Ages", "Foolin'", and "Too Late for Love". Three more would also see significant airplay on rock radio stations: "Comin' Under Fire" (the B-side to "Foolin'"), "Billy's Got a Gun", and "Action! Not Words". The first two topped the Billboard Mainstream Rock chart, and the first three were hits on the Billboard Hot 100 (with "Photograph" peaking highest at #12).

The album was remastered in 2009, and put in a deluxe edition, whose second disc was a live recording from a concert at The Forum in Los Angeles on September 11, 1983. It featured an encore with a special guest: Brian May of Queen.

"Lady Luck never smiles, so lend your tropes to me, awhile":