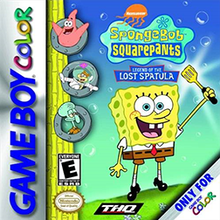 Spongebob Squarepants: Legend of the Lost Spatula is a 2001 Game Boy Color game developed by Vicarious Visions and published by THQ, notable for being the very first video game based on the world famous loony loofah. The game is a side scrolling platformer where you go through five different levels, fighting enemies and bosses while gaining a few new power ups along the way.

The plot is straightforward: one day, while SpongeBob is riding his unicycle through Jellyfish Fields, he runs into what appears to be a statue of a fry cook standing on an oven (who, curiously, was also a sponge). Intrigued, SpongeBob runs to the Krusty Krab to tell Mr. Krabs about the statue. Mr. Krabs then explains to him the statue was actually the entrance to the Flying Dutchman's underworld, and tells SpongeBob of the old legend surrounding it, that in the city of Palm Bay, there lived a master fry cook who ruled with the Golden Spatula. But Mt. Kabloovious buried Palm Bay, which ended the civilization. Then the Flying Dutchman took over the city and his first mate buried the key somewhere in Goo Lagoon. Mr. Krabs also explains that if SpongeBob manages to obtain the Golden Spatula, he will become the master fry cook. So SpongeBob sets out on an adventure to enter Palm Bay and retrieve the spatula for himself.