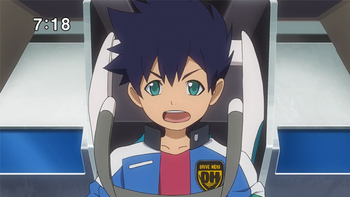 Voiced by: Natsumi Fujiwara
A 5th grader in Takatomi Elementary school. Grandson of the developer of the Drive Gear. Gou became the first Drive Head pilot for the Mobile Rescue Police, after many failed attempts with adult drivers. His Drive Head is police car-themed.He plays soccer, loves curry, and has a crush on the school idol Kasumi. Gou is childish and can be overly enthusiastic, but has a just heart and is determined to protect the city's peace. 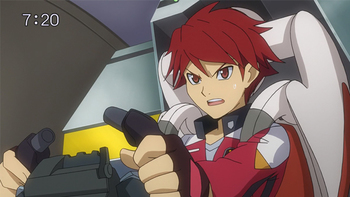 Voiced by: Sachi Kokuryu
A 5th grader in Takatomi Elementary school. Nephew to Saionji, the Mobile Rescue Police commander. His Drive Head is firetruck themed.Taiga is talented and popular in school. He can be quiet and distant, and isn't always honest with his feelings, but becomes passionate in the heat of a rescue. 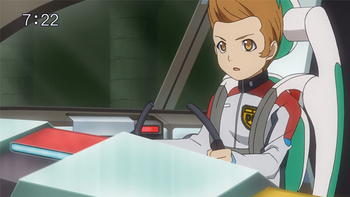 Voiced by: Kei Shindō
A 5th grader in Takatomi Elementary school. Twin brother to Mikoto. The two share a Drive Head, which is ambulance-themed.Jin is gentle, sensitive and intelligent, but he would prefer not to be thought of as cute. He has a love for all kinds of animals. 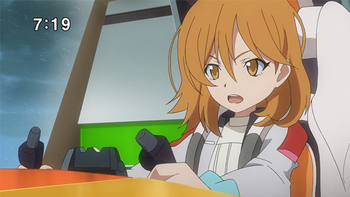 Voiced by: Sachika Misawa
A 5th grader in Takatomi Elementary school. Twin sister to Jin. The two share a Drive Head, which is ambulance-themed.Mikoto is assertive, outgoing and girly. Sometimes she'll tease or argue with the other drivers, but is typically well-meaning. She is a big fan of the idol Sala Manda. 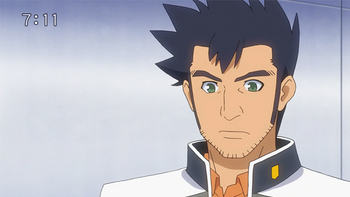 Voiced by: Kenji Hamada
Father to Gou, and son to the creator of the Drive Gear.He adores his family, but is also a workaholic who can be very absent-minded. His hobby is watching dam drainage. 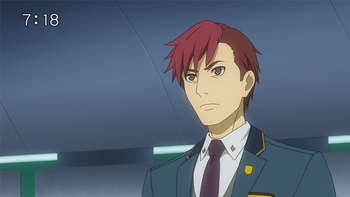 Voiced by: Kenichirou Matsuda
Commander of the Mobile Rescue Police and Taiga's uncle. He is an old friend of Kurumada. 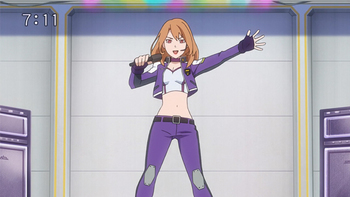 Voiced by: Kaho Kouda
A member of the Mobile Rescue Police who often supports the drivers right from the front lines.Always extremely competent and reliable. She grew up on an island. 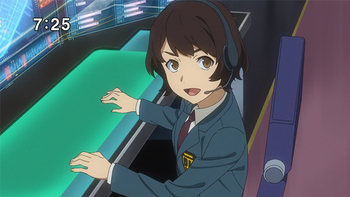 Voiced by: Ami Koshimizu
One of the operators for the Mobile Rescue Police.She's also a teacher at Takatomi Elementary school, who helps to cover up the secret identities of the drivers, and makes sure the kids are up-to-date on their school work whether they like it or not. 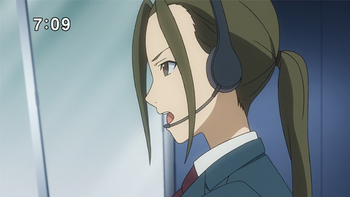 Voiced by: Ami Naito
One of the operators for the Mobile Rescue Police. She appears to be newer to the job, and less-experienced. 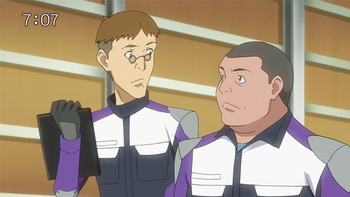 Voiced by: Junji Majima (Isurugi) and Nobuaki Kanemitsu (Izawa)
Two mechanics who work under Kurumada. They're very passionate about machines. 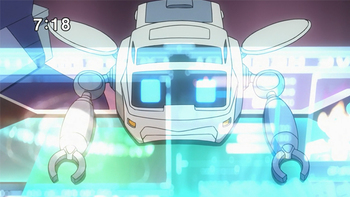 A small robot with an AI, who helps around at the Mobile Rescue Police Headquarters.
The Mobile Assualt Police 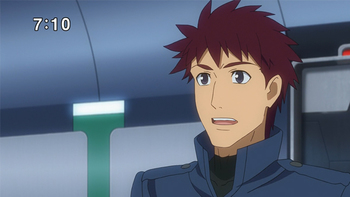 Voiced by: Takahiro Mizushima
A Drive Head driver who works for the Mobile Assault Police, a separate organization from the Mobile Rescue Police. They specialize in going after criminals involved in science-related crimes. His Drive Head is designed for making swift attacks rather than rescuing.Kuroeda is short-tempered, aggressive and blunt, but has a very kind heart.
Advertisement:
Antagonists 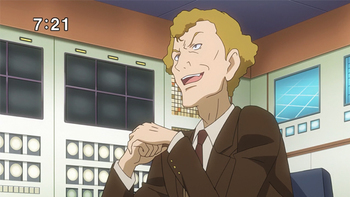 Voiced by: Kouji Ishii
A self-proclaimed "genius scientist" who despises the Mobile Rescue Police and seeks revenge on them, due to the Drive Heads being made rather than the system he developed.Though extremely petty and smug, he is not truly evil and isn't interested in actually hurting anyone. In particular, he cares for his two subordinates, as well as Sasagawa, whom he has a crush on. 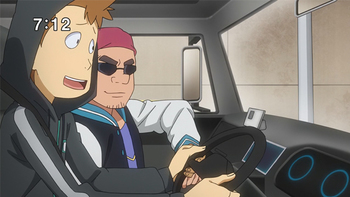 Voiced by: Tsukasa Saito(Yusuke) and Takeshi (Akira)
Two criminals, who are the loyal subordinates of Dr. Karigari.The two are foolish and often make a mess of things, but can be competent when push comes to shove. 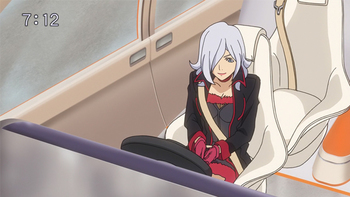 Voiced by: Marina Inoue
A jewel theif. She uses the Black Chips in order to help her commit crimes, although she is not directly associated with the Evil AI.Her partner is Idaten, an AI she met in a car she hijacked. 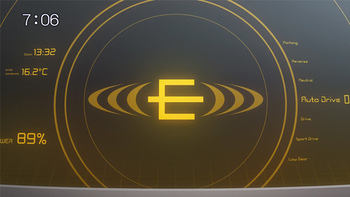 Voiced by: Rikako Aikawa
Originally the AI of a self-driving car. He was liberated from his safety features because of a Black Chip, and went wild. Maiko copied his data afterwards, and he continued helping her commit crimes. 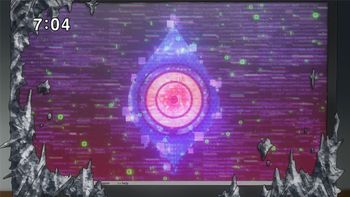 A mysterious AI with an eye symbol. It infects various machines, making them lose control and causing large-scale disasters as a result.
Civilians 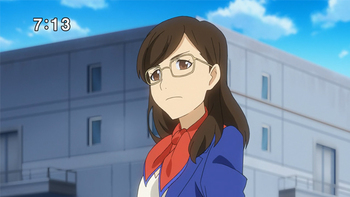 Voiced by: Yuri Sasagawa
An announcer for Akasaka TV. She is a huge fangirl of the Drive Heads, particularly Sonic/Cyclone Interceptor, and always rushes out to cover their rescues.Sasagawa is usually cheerful and upbeat, and has a love for justice. She seeks to learn the truth about the identities of the drivers, and about the cause of the various strange incidents in the city. 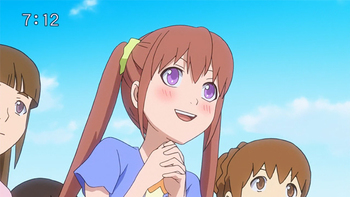 Voiced by: Emiri Iwai
A 5th grader in Takatomi Elementary school. Although popular and often seen with friends, she can be harsh to Gou.Kasumi loves Drive Head, and crushes on the driver of Sonic/Cyclone Interceptor, despite not knowing their identity.Her dream is to one day be the commander of the Mobile Rescue Police. 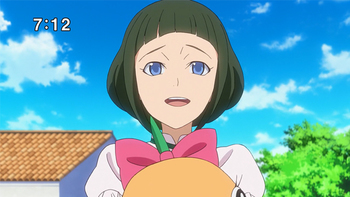 Voiced by: Aimi Tanaka
An idol singer who wears a salamander mask, keeping her true identity hidden.After she was saved by White Hope, she developed feelings for it. 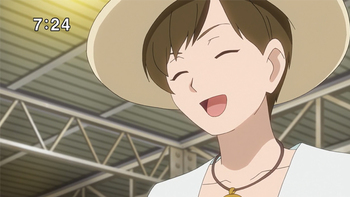