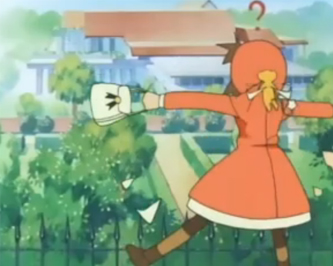 Wait, wait, wait! Tomoyo-chan lives THERE?!note Look at Kero-chan on her back: he's lifting her so she can see the house beyond the garden.
Advertisement:

In Japan, the Big Fancy House takes a meaning well beyond what it does in the US or UK. Japan is a very densely populated nation — equivalent to packing half of the USA's population in a space roughly the size of Montana, and with even more mountains — which results in some of the highest real estate prices in the world. This is doubly the case in Tokyo and other big cities where even the smallest homes can cost 100 million yen ($815,000 US) and up. Consequently, a large home with a lot of space around it is fantastically expensive, and indicates its owner has more money than the rest of the cast combined.

If the front door is more than a few feet from the street, if there are more than four or five rooms, if the rooms are bigger than the typical American walk-in closet... you are looking at the residence of somebody with wads of cash. If it looks like a French chateau and is surrounded by an actual estate, then we are well out of filthy rich and into Fiction 500.

This doesn't stop many manga-ka from driving the point home by giving their characters homes opulent beyond Versailles, however.

A family that is extremely traditional will invariably have The Thing That Goes "Doink" somewhere in the yard of their Big Fancy House. It may also be found on Middle-of-Nowhere Street.

It's also worth pointing out that if the work is still set in Japan but not in the Tokyo and Osaka/Kyoto metroplexes, and especially on Hokkaido or Kyushu, then larger houses aren't quite as completely absurd - Japan is crowded, but not so crowded that it lacks rural areas or smaller cities with somewhat less sky-high land values. Higurashi: When They Cry is a good example of a work set in such a place, although even there, the huge size of the Sonozaki residence is meant to foreshadow a good deal about their nature. This is also why a number of pieces of media, like the image-header-provider Cardcaptor Sakura, are set in technically-made-up cities or townships - they get to look like the Tokyo metroplex in a lot of ways, but the creators can Hand Wave away questions about just why everyone has such big houses.

This is not so much a Japanese Media Trope as a fact of Japanese economics, but it makes for a great visual shorthand when the animators want to let the viewer know someone is outrageously wealthy. The same premise usually applies to characters mentioning their family has a summer home somewhere.