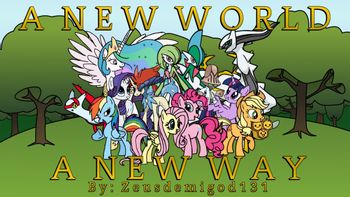 Arceus has been imprisoned for many millennia, and in that time he has watched his world fall apart. But once he is finally freed from his prison he decides that to protect his Pokemon, and his family, that he will move the Pokemon, and a few select 'humans' to a world where they might live in peace, Equestria. However, not everyone on this new world shares his view of peace and the very presence of the Pokemon upsests some of the citizens of the world, even some of the ones he brought with aren't too happy with the situation. But a god's will is a strong thing and without his willingness the Pokemon and the citizens of Equestria are going to have to learn to get along, or at least tolerate each other. And there's a slight problem with some of the humans too, well, former humans that is.
Advertisement:

A New World, A New Way is a Crossover fanfic between Pokémon and My Little Pony: Friendship Is Magic written by Zeusdemigod131

. The story is set in an Alternate Universe of Pokemon (the writer himself admits that the Pokemon world here is a hodge podge of the anime, games, and mangas), and takes place somewhere after the beginning of Season four of Friendship is Magic.

The author has also allowed other authors to write side stories for A New World, A New Way, many of which have since crossed over with the main story. As of May 3rd 2015, the "Primary Canon" includes:

A few stories considered "Sub-Canon" (due to not having crossed over with any of the above yet) include:

A New World, A New Way Book One has been completed. Book Two is now in progress, on the same story linked above.

There are also many Non-Canon stories that do not adhere to the main continuity, which allows authors to have the freedom to do other things without oversite and worrying about breaking Canon: