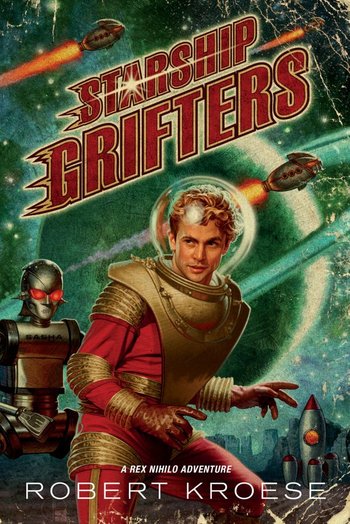 A sane person is always at a disadvantage when negotiating with a lunatic.
"The early thirty-first century was a dark time in the galaxy, as the oppressive regime known as the Galactic Malarchy threatened to snuff out the last remaining embers of freedom far out on the southern end of the Perseus Arm. Only a ragtag bunch of rebels stood between the Malarchy and total galactic domination. These brave heroes risked everything to preserve the dream of a galaxy comprised of an informal association of relatively free planets. This is not the story of those heroes."
— SASHA
Advertisement:

He's a Lovable Rogue with a sassy sidekick who traverses the stars in search of treasure. Rough around the edges, he is nonetheless a hero at heart who can always be counted on to do the right thing and perhaps even save the universe with righteousness he claims not to possess. Rex Nihilo is... not that man.

Rex is a crass, manipulative, incorrigible rube who is so obsessed with self-enrichment, that he puts a bigger premium on it than self-preservation. He is a "legendary space merchant", more infamous than mythical, and he's quite possibly one of the most dangerous men in any galaxy unlucky enough to have him in its general vicinity.

An arms deal gone bad on a planet suffering from rampant inflation (earning him quintillions of moneys that would, at best, buy him a funnel cake), has him and his robotic sidekick Sasha stow away on an opulent interstellar gambling ship where the typically conceited and erratically callow Rex manages to win not only millions of actual valuable currency and a new (banged-up) star clipper, but an entire planet as well.

The planet has its share of dark, if rote, secrets however, and someone has to pay for them. And Rex is going to use every last one of his wits, embroiling himself in an intergalactic war that will put him in conflict with falsetto fascistic enforcers, big-boned princesses, space missionaries, and world-ending technologies to ensure... that he isn't that someone.