Theatre / Knights of the Square Table 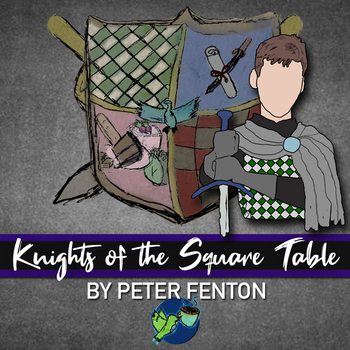 SIR GALAHAD: I don't write the legends, I live 'em
" As you know, my courtship with Prince Charming ended abruptly – something about a glass slipper. Whatever. I didn’t care to listen. Anyway, I’m offering my hand in marriage to any brave knight who wants to go on a quest – it’s not a bad deal really, you just go on an epic adventure and then you get to marry me, and then you and I will be king and queen someday. So, any takers?"
— Princess Jaqueline

Knights of the Square Table is the debut work from playwright and screenwriter Peter Fenton originally titled Good Knight and Goodbye and premiered in 2010, when Fenton was just 14 years old. After nearly a decade of revision, the script became a fully-fledged play distributed through Heuer Publishing in 2019. As the title implies, this play is a medieval knight’s quest comedy with a similar sense of humor to Spamalot and Galavant.

The legendary (but painfully down-to-earth) Sir Galahad is sent by the king and queen on a quest to prove his worth to marry Princess Jacqueline. His quest is complicated when he catches the eye of Lady Heron, the castle’s messenger, and finds himself falling for her while a ruthless and selfish type lurks in the shadows, also on the quest for the Princess’s hand.

As he travels the kingdom of Slekochovakia, Sir Galahad receives assistance from the kooky, promiscuous Merlin and a true friend, Sir Traber. Pandemonium steadily builds as Sir Galahad must confront his feelings, Merlin’s antics grow bizarre, Lady Heron grows frustrated with the King and Queen’s incompetence, and Princess Jacqueline acts strangely in the face of a wedding being planned for her.

Knights of the Square Table contains examples of: