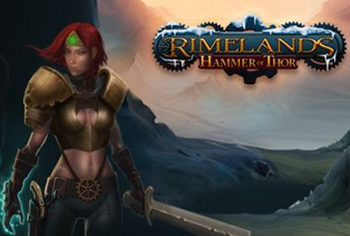 "I cannot leave these chambers. Downsides of being a dead god. Please? I'll give you potions!"
—Thor, in response to the Player Character asking why he doesn't simply vanquish the Big Bad himself.
"Yes, excellent laugh, sir, if I may say so."
—Big Bad's Assistant

Rimelands: Hammer of Thor is a 2010 iOS game. Its backstory has the mankind tunnel underground after the surface was rendered uninhabitable by the nuclear holocaust, carving out caverns and towns called Vaults. While down there, they rediscovered Steam power, and rebuilt civilization. Several expeditions were led to the surface eons later, where it was discovered that Fae Folk (elves) have inhabited the surface now. After a war, an uneasy truce has been forged, allowing humans to re-colonize the surface. Players take control of Rose Cristo, a red-haired treasure hunter and adventurer, on a quest to... well... hunt treasure. Along the way, she discovers her true identity, and gets entangled in a larger conspiracy that threatens to destroy both humans and the Fae.

Gameplaywise, it bills itself as a "steampunk adventure game using dice". In short, it's a turn-based role-playing game with two hub towns, and several dungeons. Battles are turn-based affairs determined almost entirely by rolls of dice. Getting more proficient in your class' method of attack will give you more dice to roll per attack, granting the possibility of more devastating damage. The dice, despite being 6-sided, have only four possible outcomes: a skull (which counts as a hit), a double skull (critical hit), shield (cancels out one of the opponent's skulls when throwing for defense), and an X (miss/failed block).Certain skills can modify the dice so that when rolling for attack, all shields count as double skulls, for example.

The game features three classes: the melee-focused Barbarian, the pistol-wielding Assassin, and the magic-using Shaman. Instead of being locked into one class from the start, players are allowed to pursue any combination of the skill trees, or all three at once, though this will make for a weaker hybrid character instead of a potent specialized one. The game has a cookie-cutter story riddled with cliches and tropes, and mostly serves as an excuse to get you into the dungeons and experience some dice-rolling goodness. Rimelands won many perfect and near-perfect scores from gaming review sites, as well as the 2010 Unity Award for Best Mobile Game, and Slide To Play's Game of the Month for September 2010.