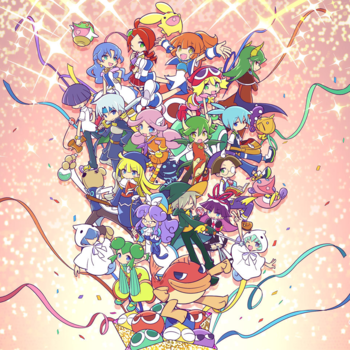 Certainly the most... unique group you'll ever come across.note And this STILL isn't everyone!

Due to the Loads and Loads of Characters nature of the franchise, groups of characters are split off into different folders or pages. 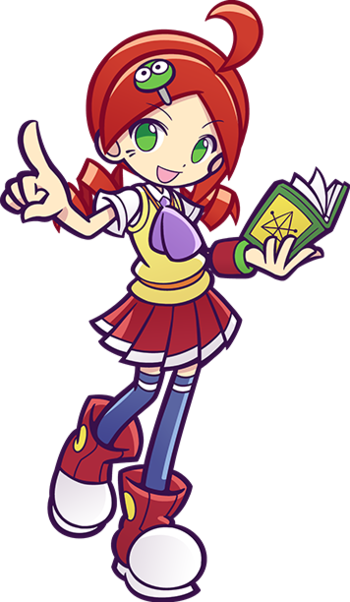 Oh, come on! No Puyo, just this once!

A resident of Suzuran, Ringo is a teenage girl who attends Suzuran Junior High School and works part-time at her family-owned grocery store in the Suzuran Shopping District with her parents. She lived her life as your typical teenage girl... until the events of Puyo Puyo 7 forced her to learn how to play Puyo and save the world from impending doom. Ever since those fateful events, she's experienced the weirdness of the franchise on an almost daily basis. She is a generally intelligent girl who is always curious about solving mysteries, but this also results in her being the only person that remotely questions the insanity around her. 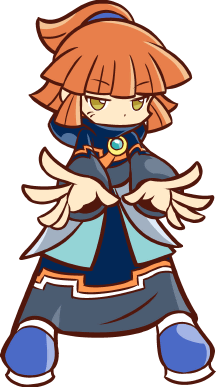 The main antagonist of Puyo Puyo 7. While little is known about her, she has Arle's spitting image and orchestrated the flood of Puyo upon Suzuran. In truth, she is actually the real Arle Nadja being possessed by Ecolo. That said, her personality is nothing like the host's or the guest's, as she shows little emotion.

All worlds! All universes! All of everything! And you silly people too! All shall be buried in Puyo!!! 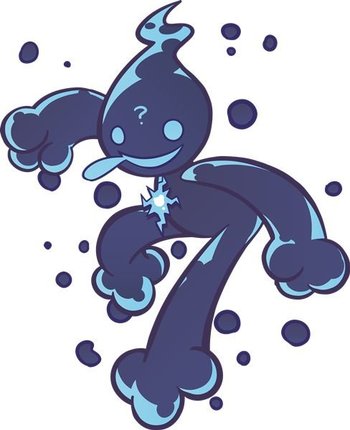 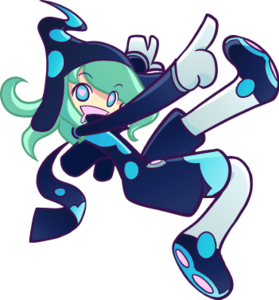 A blob-like space-time traveler with an extremely playful disposition. Though powerful, he does things where his whims take him with no real sense of human morals, which more often than not leads to dire consequences. In 20th, he gains an alternate humanoid version named "Unusual Ecolo".

I can see love... love beyond the explosion. 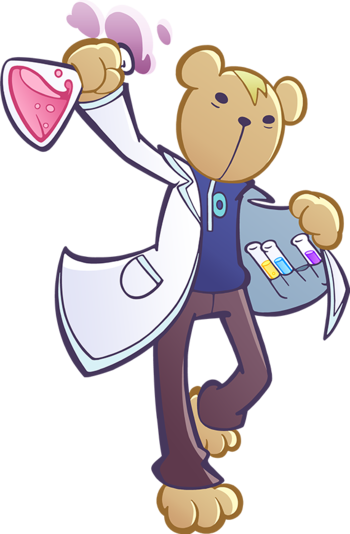 Another resident of Suzuran, he is Ringo and Maguro's senior who attends Suzuran Junior High and runs the Suzuran Junior High science club. After an accident in the school's science lab, he apparently became a human-sized squirrel-bear hybrid wearing lab clothes and is now obsessed with love. ...No, this isn't the weirdest thing about him.

Well, the truth is... something's controlling me! I'm so ashamed~. How am I supposed to whisk Takoyaki batter if my body would rather do something else? 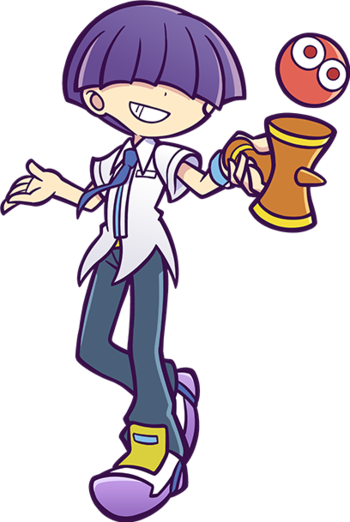 Yet another resident of Suzuran, Maguro is the "fashionable" eldest teenage son of Suzuran's local fishmongers. He's a bit of a Deadpan Snarker, and is sometimes even considered to be a bit of an oddball. He attends Suzuran Junior High alongside his friends Ringo and Risukuma. In fact, he's been best friends with Ringo since they were little kids.

The captain of the Starship Tetra and the current ruling king of the Tetris Kingdom. He's very mindful of his manners, but that also makes him rather stoic. Tee first meets Ringo onboard when tetriminoes started raining down in Suzuran. 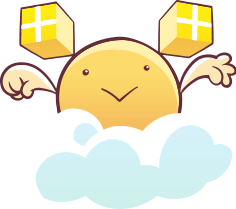 Tee's partner, and the ship's communications officer and mascot. He only ever utters "pi" or "bi" when speaking, but his cuteness keeps the crew in high spirits. He shares a parallel with Carbuncle, being yellow, animal-like sidekicks that don't speak with words. 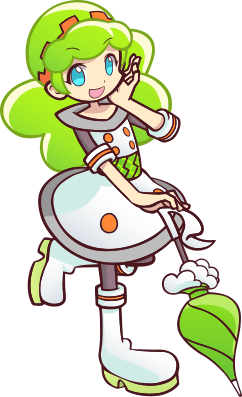 The navigator of the Spaceship Tetra. Although she may look cute, this green-haired crew member is quite rude, bratty, and a crybaby. Even so, she is quite fond of her Papa. 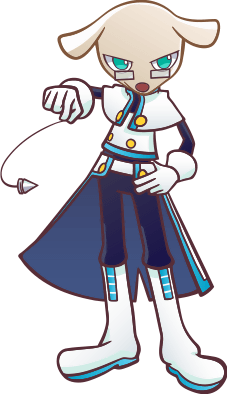 The ship crew's engineer, Ai is a dog with extremely high intelligence. Despite this, he's quite skittish and is easily undermined into a whimpering mess. He's also often picked on by Jay and Elle. 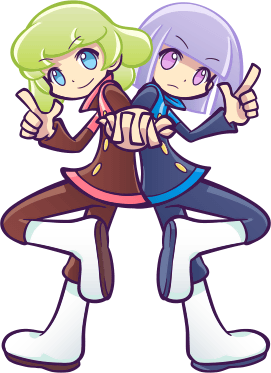 A mischief-making duo, acting and speaking in sync with each other. You never see these two separate, and are often picking on Ai just for kicks. 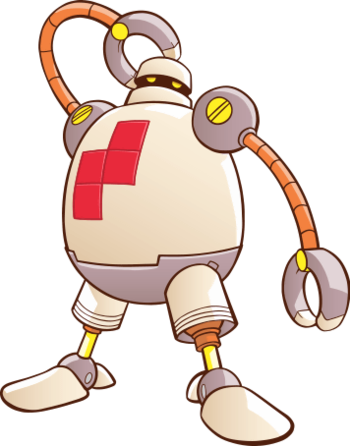 The intimidating, but dutiful robot housekeeper of the ship. He mistakes Arle and Carbuncle as troublemakers, but was convinced otherwise. For some reason, Ess calls him "Papa". 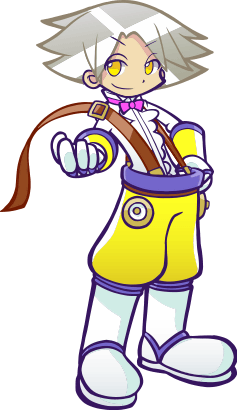 The former king of the Tetris Kingdom, and the Keeper of Dimensions. He's incredibly laid-back, but has grown quite lonely at the Gate of Dimensions.
Characters Introduced in Puyo Puyo Chronicle 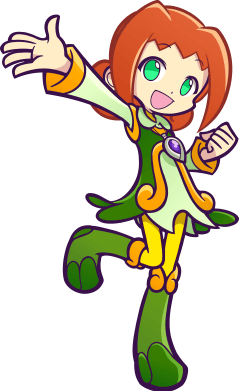 A self-proclaimed adventurer that is looking for a prophesied hero, who helps Arle and Carbuncle return to their home world. She believes that everything can be solved using the power of love. 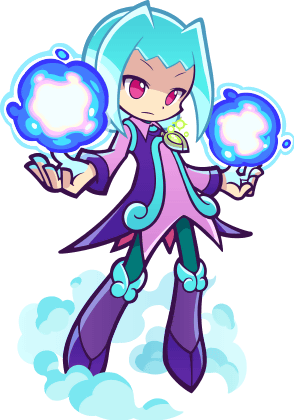 Ally's evil clone, spawned from Ally's pendant. As a being born into loveless existence, she lacks empathy and believes she only exists to consume all. 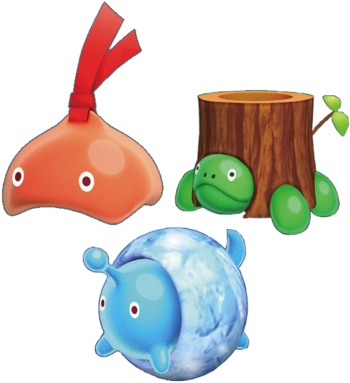 Pictured above in clockwise order: Red Rammit, Woodtle, Ice Wheeloo
Various types of monsters the player will encounter in the RPG mode. Each one has their own characteristics in battle.