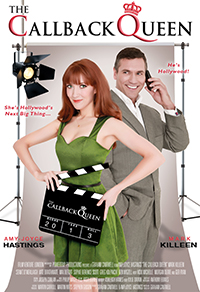 Kate Loughlin is an ambitious but unlucky actress struggling to get her big break. When she lands an audition for the lead role in a massive movie franchise based on the Prince of Chaos novels by legendary author Horatio King, she passionately seizes the opportunity. However, a sleazy agent, trying to pimp her to director Vincent Catalano, pushes her to the other extreme. Determined to prove her strict professionalism, she starts second-guessing Vincent's motives.

Meanwhile, rival starlet Luci makes no secret of her ambitions. When Kate and Vincent are repeatedly thrown together on the set of a smaller film project, Kate's resolve to maintain her integrity is put to the test as she gets closer and closer to her desires. In the cut-throat arena of show business, Kate stands to learn that her profession is personal, and sometimes friction can create a spark.

The Callback Queen contains examples of: