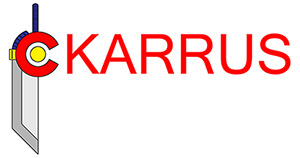 CKarrus is a webcomic created by Gojiramon/Injuredpelican. It's usually updated once a week, usually on Wednesdays. The comic has near constant nudity, so its NSFW to link it, but it can be found on ComicFury and Tapas. The artist and writer, Gojiramon/00GojiraMon, also has a Deviant Art account with extra art.

"CKarrus (Suh-Kar-rus) is the story of a young man who is running from his past and himself, when suddenly he meets a beautiful young woman who changes his life forever. Adventures ensue, and old and new enemies are fought, while both heroes learn to accept themselves for who they are and what they are ultimately destined to become."

The story takes place on the Planet Aeries III and stars Tombstone, a mysterious badass in a Badass Longcoat, as well as Juline Baine, a seemingly normal young woman, who is caught up in the action when the military mistakenly thinks she is Tombstone's accomplice. So far they have fought military police and a giant robot, while even more enemies behind the scenes plan to try and capture Tombstone for unknown reasons. The story also has several flashbacks explaining Tombstone's past as well as recent history of the planet.