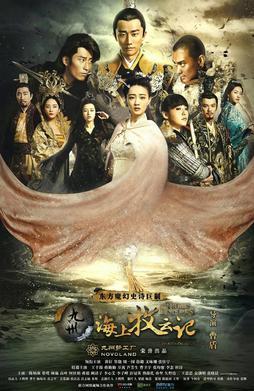 Tribes and Empires: Storm of Prophecy (九州·海上牧云记, Jiǔ Zhōu Hǎi Shàng Mù Yún Jì) is a 2017 Chinese series starring Huang Xuan, Shawn Dou, Zhou Yi Wei, Xu Lu, Janice Man, and Zhang Jia Ning. It's based on the novel of the same name by Jin He Zai and is part of the Novoland universe. It's the third television series based on the Novoland series.

Prince Muyun Sheng is given a magical pearl that belonged to his late mother. He becomes increasingly obsessed with the world he sees in it — which causes problems when he becomes king and decides to destroy the barrier between the palace and the River Folks. Meanwhile, the country is under attack from enemies — including ones on the inside.