Series / Who's The Murderer 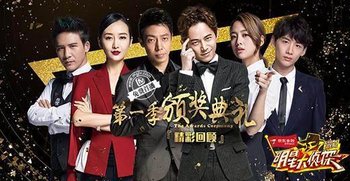 Who's The Murderer (simplified Chinese: 明星大侦探, literally "Famous Detective") is a murder mystery variety show produced by Mango TV. Unlike its predecessor Crime Scene, where real crime scenes from Korea and abroad are recreated, the show sometimes employs Magic Realism and has cases that occur in The Future.

Similar to the Korean version, cast members are introduced to the settings and suspects of a murder case, and they can choose the role they want to play for the reenactment of the case, either as a suspect or the detective. Players are separated into two teams and are given ten minutes to investigate the crime scene for evidence, bringing a camera (later a smartphone) that can take up to ten pictures and in the case of the smartphone, videos and sound recordings. The cast collates their evidence during the free briefing segment. After this, additional on-site investigation is given, and during this, the detective heads to the interrogation room and calls another player in order to have a one on one discussion with them. After all of the players have had their one on one interrogation, each player then secretly votes for who they think is the final criminal, and the result of these votes determine the outcome of the game. If the person is indeed the criminal, the detective receives two gold bars, and the innocent players receive one each. If the arrested person is not the criminal, the true culprit gets all the gold bars.

Unlike the Korean version, however, the murder cases are not limited to sets inside a studio: in the third season, all the scenes have become realistic (such as a real cruise ship, hotel, and hospital), in which the cast members experience the whole crime setting themselves. Props and the background of the cases are all original and solid, though in the later seasons, the studio set makes its return in a few episodes. As the seasons progress, there are one to two victims for each case, making the cases far more complex. The detective's assistant is played by various university students, who also play the roles of the victims in some cases.