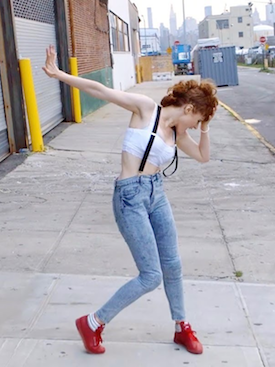 Born and raised in Calgary, Alberta, Kiesza learned tap dancing and jazz dancing while growing up, and even attempted ballet, until a knee injury put an end to that. She also joined the Royal Canadian Navy in her teenage years alongside her brother, and became a codebreaker. She wrote her first song at 18, after her parents split up. Briefly, she was into folk music, but she abandoned that once she partnered up with producer and songwriting partner Rami Samir Afuni.

She released the retro-sounding house track “Hideaway” in February 2014, through indie label Lokal Legend. It lit up in the UK, selling over 136,000 copies in its first week, while it reached #6 on the Canadian Hot 100. The Hideaway EP saw an American release later in the year, highlighted by a memorable Late Show performance.

Sound Of A Woman was released in October of 2014.

Tropes associated with Kiesza include:

Baby, I love the way that there's nothing sure
Baby, don't stop me, hide away with me some more...