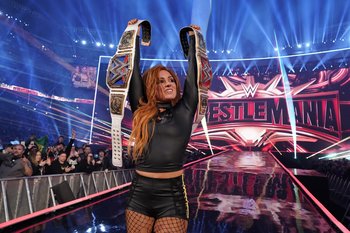 The Man benefits greatly from an Era like this one.
Advertisement:

This is the era of the WWE we are currently in.

The WWE of 2016 had a lot of faults and genuine promise. The Roman Reigns as a main eventer experiment was still very much in effect, NXT was firing on all cylinders, and a big splash was needed to begin what would be considered the next "era" of the world's biggest wrestling promotion.

That splash would come in the form of AJ Styles, the former ace-up-their-sleeve of TNA, debuting for WWE. This sent shockwaves throughout the wrestling world, as Styles had been so loyal to TNA, and was unusual in that he skipped NXT entirely and became a big deal main eventer from the first day he showed up. Indeed, the "New Era" is one of consolidation of power for the WWE, as their current strategies revolve around mass talent gathering now that they have both a dedicated performance center to build new stars in-house and NXT to help hone them. Many of the current stars of the New Era came up through NXT, and the yellow brand has branched out quite a bit in terms of getting talent from all over the globe. The WWE Network would also begin to get major PPV level shows that were shown only on its own service, meaning fans had plenty to choose from if they wanted to branch out from the main shows.

This new era would also spark the re-creation of the Brand Split, with the conceit being that Vince McMahon believed that his children Stephanie and Shane should face off to see who could make the better show out of Raw and SmackDown, and cut the roster in half to facilitate this. SmackDown in a coup ended up with the WWE Championship, and to counter, Stephanie created the WWE Universal Championship, and started its existence off impressively with a genuine new star in Finn Bálor winning it over established main-eventers like Reigns and Seth Rollins. SmackDown Live, as it was now called, would get the last laugh, as fans generally conceded that, while both shows had their ups and downs in this new ecosystem, the blue brand had once again reclaimed its title as the "work-rate" show, hosting many fantastic feuds and storylines, as well as putting an emphasis on undercard storylines (giving the show a massive boost it hadn't had in quite some time). To the point that, when looking for a new channel for SmackDown (as it usually ends up needing), the juggernaut Fox was willing to bring it aboard in 2019. This coincided with a face-lift for both brands with much flashier visuals, a sorely missed part of production that had become muted in recent years. This was also a time for bold experimentation, not just of gimmicks, but of content; The Mae Young Classic and Cruiserweight Classic, a women's and cruiserweights tournament respectively, gained near-universal praise, to the point that the Mae Young Classic came back a second time, and the Cruiserweight Classic was so beloved that it created its own show in 205 Live.

Even better were the women's storylines across brands, which moved away from the "Divas" branding for good, replacing it with simply calling them "Superstars" like the male wrestlers, and the rise of the Four Horsewomen (Charlotte Flair, Sasha Banks, Becky Lynch, and Bayley) along with Alexa Bliss and Asuka, all of whom would end up women's champions of either Raw or SmackDown Live at different points. This mass injection of talent meant that women's wrestling is now being taken much more seriously than before, and it culminated in the first women-only pay-per-view in Evolution. Some, like Becky Lynch, became so popular during this time they went a step beyond just main eventing NXT events: in 2019, the women's title match main evented WrestleMania.

It was also in this era that female talents from the WWE Women's Division all had different looks and body types, as well as distinctive characters. In addition, WWE's female talents were now allowed to use maneuvers that were previously been restricted only to men, such as punches, forearms, and kicks, as well as compete in gimmick matches that were previously reserved for men, such as the Royal Rumble match, the Elimination Chamber match, the Money in the Bank ladder match, the Hell in a Cell match, hardcore matches, TLC matches, and steel cage matches, rendering Divas Era catfights, bikini contests, pillow fights, and costume matches an afterthought.

But with a lot of good comes a lot of controversies. The WWE began a working relationship with the Kingdom of Saudi Arabia in 2014, and thanks to an extremely lucrative contract with the Saudi government, began airing PPVs from the kingdom in 2018, starting with the Greatest Royal Rumble. This attracted a lot of negative attention that will go relatively unremarked upon from here on, with the company suffering a massive PR hit for working with the country. The company also began to receive a ton of flak for the long-time use of the phrase "independent contractor" to describe what their wrestlers are in the eyes of the law, and the toll put on their bodies by being on a worldwide, every-night-a-week schedule (especially after the company reignited the regular mass firings that had not been seen since the 2000s). WWE also took major criticism for mishandling 205 Live and the reborn cruiserweight division which, despite being a show filled with fantastic workers and matches, ended up being very poorly advertised.

Still, the WWE went unmatched, as it did for the good part of the century. Then in 2019, something happened...

After the successful Indie PPV All In, which took place on September of the past year, a billionaire by the name of Tony Khan joined forces with a group of independent wrestlers from Ring of Honor and New Japan Pro-Wrestling and gave shape to All Elite Wrestling, WWE's first serious competition in almost two decades. While initially shrugging off the new company as "not competition", WWE relented and promoted the hidden gem NXT to live television. Suddenly, everyone could see the excellent matches and angles that previously were available only to members of the WWE Network. Their time slot would compete with AEW's new show, AEW Dynamite... and it failed to beat it. Even though the 18-49 demographic enjoyed both shows, AEW was the clear winner of the so-called Wednesday Night Wars. As a result of the loss, NXT was first moved to Tuesdays, and then overhauled halfway through 2021 into NXT 2.0, a show that reconverted the formerly black and gold brand to a developmental show resembling Raw and Smackdown. The Cruiserweight division, then reconverted into another of NXT's divisions, was straight-up shut down alongside 205 Live in early 2022. Those that did become stars from 205 Live got scooped up into Raw or SmackDown and immediately shoved down the card.

And, in addition to AEW, the company would face another obstacle in the form of a world pandemic that saw it being forced to first do matches in empty arenas, then the Performance Center, then doing entire PPVs such as WrestleMania in the PC, then switch to a show with screens resembling a live audience called "The Thunderdome". It would take another year before the crowds would return to live shows (for WrestleMania 37).

And if all of the above weren't enough, several WWE wrestlers, fed up with the backstage antics of the main roster and their booking mishandling by both WWE Creative and Vince himself, saw in the new company greener pastures where they could properly showcase what they could do, starting with Dean Ambrose after WrestleMania 35, who almost a month later would appear at the tail end of AEW's first PPV, Double or Nothing under his pre-WWE name of Jon Moxley. In fact, during 2020 and 2021, in a controversial decision that brought A LOT of criticism to the company, more than a hundred wrestlers (and even more non-wrestling personnel) would be released from their contracts, among them big names who nobody could predict being released such as Bray Wyatt, Braun Strowman, and Nia Jax. Several of them managed to get work in other promotions such as AEW, NJPW, and Impact Wrestling, while others chose to retire from the business.

It remains to be seen if WWE can recover from its controversies and if the newfound competition forces the company to improve itself.