Web Video / In Service Of Nothing

They forgave me my transgressions. 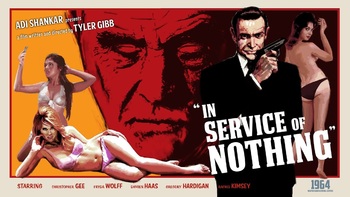 2015 Short Film / Fan Film written and directed by Tyler Gibb and produced by Adi Shankar, who also produced Dredd, The Grey and the popular The Punisher fan-film Dirty Laundry. Like the other fan-videos in Shankar's 'Bootleg Universe' series, it offers a dark, rather deconstructive take on a popular pop-culture icon...

Once, our main character was a debonair secret agent with a license to kill. Women wanted him and men wanted to be him. He travelled across the globe armed with the finest of weapons and the most high-tech of gadgets to battle megalomaniacal villains who threatened the world. He defended his country and terminated its enemies with ruthless precision and efficiency. He battled evil, bedded beautiful women and saved the world, all in the name of England and its ideals, for Queen and country. He was the best.

But then, one day, his services were no longer required.

Now he is an old man, retired, living in a country which has apparently forgotten him and the ideals he fought to protect for so long. The world has become very different, but our main character hasn't — and now he struggles to find a place for himself, if such a thing is even possible...

Can be viewed here