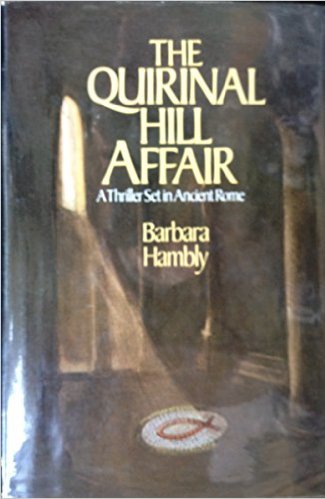 Search The Seven Hills aka The Quirinal Hill Affair is a Historical Detective Fiction novel by Barbara Hambly set in Ancient Rome during the last years of Trajan's reign.
Advertisement:

Marcus Caius Silanus is a young Roman aristocrat disowned by his abusive father for studying philosophy. He is hanging around his old stomping grounds on the Quirinal Hill to catch a glimpse of his childhood friend and love who he has heard has been betrothed to another man - and sees her kidnapped by a clutch of nasty-looking characters, one of whom drops a small fish charm, which a horrified Marcus identifies as a symbol of the outlawed Christian cult. He knows he must rescue his love, Tertullia Vara, quickly before she is raped in an orgy or sacrificed to the Christians' god. Marcus enlists the aid of a reclusive old patrician nobleman, an expert in Eastern cults, and his household of intelligent and assertive slaves in a frantic 'search of the Seven Hills' of Rome that takes him from the (literal) underworld of weird alien cults to the even more corrupt upper levels of Roman society.