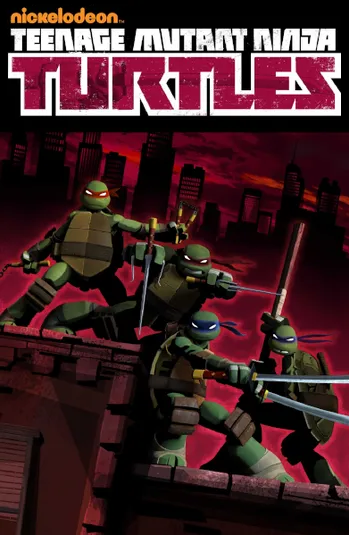 "Booyakasha!"
Here we go, it's the lean, green, ninja team
On the scene, cool teens doin' ninja things
So extreme, out the sewer, like laser beams
Get rocked with the Shell-shocked pizza kings
Can't stop these radical dudes
The secret of the ooze made the chosen few
Emerge from the shadows, to make their moves
The good guys win and the bad guys lose!
— The show's Theme Tune
Advertisement:

Teenage Mutant Ninja Turtles, commonly called TMNT 2012, is an All-CGI Cartoon that acts as a Continuity Reboot for the Heroes in a Half-Shell. It was produced by Nickelodeon Animation Studio side-by-side with another reboot (Winx Club). The two shows marked the first-ever Nicktoons based on preexisting cartoon franchises.note Nickelodeon's parent company, Viacom, bought both franchises at the turn of the decade.

It's the Turtles' fifteenth birthday and they're itching to venture up to the surface and showcase their ninja skills. Master Splinter reluctantly agrees. At first, they love the surface with its weird lights and even stranger food (like pizza). However, things go awry when they witness a girl and her father being abducted by men in a van. They try to intervene, but don't fare well during the fight, with the van getting away, only to discover that the kidnappers are really robots with living brain creatures in their chest and were carrying the ooze that made them into mutants!

Eager to learn more of this strange connection, the Turtles regroup and begin to practice fighting as a team with Master Splinter appointing Leonardo as The Leader. After storming the enemy fortress, they learn that these creatures are called "The Kraang" and have sinister plans in store. They manage to rescue the girl, April O'Neil, but the Kraang still have her father. They vow not to rest until they rescue him.

Unfortunately, the Turtles' attack has not gone unnoticed by the media, which alerts The Shredder to come to New York to take on Hamato Yoshi's students himself. What ensues is the escalating war between the Hamato and Foot Clans, a Myth Arc that turns out to have been in the works for far longer than most of the cast knows, the unraveling mystery of the Kraang's agenda for Earth and humankind, and a whole host of mutants who take up residence in the city. Some will be heroes, some will be villains, and it’s up to the Turtles to keep the city and the planet safe from any threats as they grow up and learn what it means to be a family of ninjas.

The 2012 series is a reboot of the 1987 series, since it uses and/or modernizes a significant amount of that incarnation's characters and elements. However, it also tends to use characters and elements from the Mirage comics and other previous incarnations, as well as introducing its’ own additions to the mythos. The series also manages to strike a middle ground in regards to tone between the 1987 series and the 2003 series, frequently moving between darker stories and arcs of the latter and zany adventures and pop culture references of the former.

The series began on September 29, 2012. Before even finishing its first season, the show was renewed for two more. A fifth and final season (now retitled Tales of the Teenage Mutant Ninja Turtles) premiered on Nickelodeon in 2017. Unfortunately, this season was Screwed by the Network, and seven episodes were Channel Hopped to Nick's smaller sister channel, Nicktoons Network. A replacement series, Rise of the Teenage Mutant Ninja Turtles, premiered in 2018.

Three video game adaptations were released in 2013 for the show, the abysmally-reviewed Teenage Mutant Ninja Turtles: Out of the Shadows (with the Turtles radically redesigned from their television likenesses), followed shortly by Teenage Mutant Ninja Turtles (2013) (this one with the cartoon's aesthetics), which was slightly better received. A game for mobile devices has also been released, as well as a LEGO racing game on the LEGO website. In 2017, it likewise got an arcade game, following in the footsteps of its '80s predecessor, though this one was developed by Raw Thrills rather than Konami.

In a unique touch, each season of the show features the Turtles watching a cheesy cartoon (parodying a specific decade per season) that usually foreshadows events of an episode (which was outright lampshaded on one occasion). Check out the Space Heroes Page, Super Robo Mecha Force Five Page and the Crognard the Barbarian Page.

The tropes unique to this adaptation include: