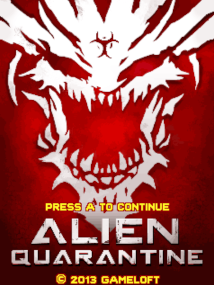 Alien Quarantine is a 2013 video game for mobile phones and smartphones by Gameloft. In it, you take control of Jason, a mercenary who has to take on several aliens on a ship with six types of weaponry, meeting other characters along the way. Each level also has 5 blood samples to collect, the amount of which you get for each level is determined by how well you perform.

This game provies examples of: