Abagail is God's prophet on Earth and the guide to the main characters. She is a 108-year-old black woman who lives in Nebraska. Almost every main character dreams of her sitting on her porch, playing her guitar, usually directly after they have a disturbing dream about the Big Bad.
Advertisement:
Stu Redman

Stu Redman grew up in Arnette, Texas, and was stuck working in a calculator factory to support his brother when his parents died. When the Superflu's Patient Zero crashes into the gas station in his town, Stu was transplanted to a plague control center in Vermont. A redneck with a heart of gold, Stu quickly becomes a leader among survivors.
Frannie Goldsmith

A college girl, Frannie discovered at the beginning of the book that she had become pregnant with her boyfriend, Jesse. She had traveled home to Ogonquit, Maine, to tell her parents when the Superflu hit. Frannie cares most about keeping those she loves, especially her unborn child, safe.
Nick Andros

Nicholas Andros was born deaf-mute. To communicate, he reads lips and writes on a pad of paper. Orphaned at a young age, Nick grew up in an orphanage. He left at age 16 and hitchhiked from town to town, taking odd jobs. Nick is in Shoyo, Arkansas, when the Superflu hits. He cannot understand why people look to him as a leader.
Larry Underwood

Larry started off a career as a singer/songwriter but was unsuccessful until his single "Baby, Can You Dig Your Man?" hit it big. He was taken in by people taking advantage of his fame and fortune, and traveled to his childhood home in New York City for refuge. Larry is haunted by the words of a woman he slept with, "You ain't no nice guy!" and of his mother, "You're a taker, Larry." He is determined to prove them wrong and terrified that they are right.
Ralph Brentner

A middle-aged farmer from Oklahoma, Ralph is the first person Nick and Tom meet on the way to Hemingford Home after the unfortunate incident with Julie Lawry. He becomes one of the Free Zone Committee members.
Advertisement:
Glen Bateman

Glen was a sociologist and novice painter before the Superflu. When he meets Stu, he is living on his own with an adopted dog, Kojak. He loves to speculate on the post-flu future, and gives Stu and others good advice about the new Boulder government.
Kojak

Formerly known as Big Steve, Kojak is one of the few dogs to survive the Superflu. He is very smart and fiercely loyal to his new owners, to the point of fighting wolves and running across half the country to be with them.
Tom Cullen

Tom was born lightly mentally retarded, only able to make certain connections normal people find easy by putting himself in a state of near-hypnosis. He never had any friends until Nick found him lying in the road in his deserted hometown of May, Oklahoma. Despite acting like a child, Tom is braver and smarter than people think.
Harold Lauder

Harold Lauder grew up in Ogunquit, Maine, as the fat kid whom nobody liked. He always had a crush on Frannie Goldsmith but never told her. Harold is extremely bitter and sees his new situation as a chance to get Frannie once and for all.
Nadine Cross

Nadine has had dreams of the Big Bad, Randall Flagg, since college. She is his promised wife and mother of his child. By the time Larry finds Nadine, she is desperate to find someone to tear her away from Flagg's spell over her, whether it is Larry or Joe.
Advertisement:
Joe/Leo Rockway

Leo was still a kid when the Superflu hit. When Nadine found him, he was sick from an infected rat bite. When she nursed him back to health, he was unable to speak, dressed only in his underpants and carried around a knife the way most kids carry around teddy bears. She named him Joe for lack of a better name.
Dayna Jurgens

Dayna was traveling with other survivors when they were attacked by a gang of rapists. Her friends were killed and she was one of the gang's playthings until the day she and the other girls, along with Stu and Frannie's group, are able to overthrow them. Dayna is fiercely loyal and independent.
Lucy Swann

Lucy meets Larry's group in her hometown of Enfield, New Hampshire. She and Larry fall in love offscreen. She sees the best in him and tries to help him do the same.
Rita Blakemoor

Rita was the wife of a rich man and never had to do anything herself until the Superflu hit. She meets Larry in New York City and latches onto him. She can't deal with the horrors around her and depends on Larry heavily for support.
Richard Farris

Also known as Judge Farris. He is a wise old man with a thirst for adventure.
Susan Stern

Susan is with Dayna in the group of girls gathered by rapists as playthings. She's later part of the Free Zone committee. 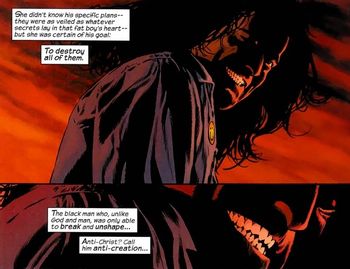 Randall Flagg, called The Dark Man, Legion, and The Walkin' Dude, is the ultimate evil. He is the servant of the Devil himself. He haunts Superflu survivors' dreams and gathers an army of insane or frightened people to him. His smile can drive a man insane and he crucifies those who oppose or fail him.

Lloyd was a small-time criminal until he met a fellow jailbird, Andrew "Poke" Freeman. Together they went on a killing spree until they're eventually caught and Poke is killed. Lloyd is trapped in jail when the Superflu hits and becomes Flagg's right hand man when he is rescued.
Trashcan Man

Donald Merwin Elbert, nicknamed Trashcan Man because of his childhood habit of setting fires in trashcans, is a pyromaniac of the first order. All he wants is a place where he can blow things up unmolested. He fits right in with Flagg's crowd and becomes undyingly loyal to Flagg.
The Kid

An all-American maniac from Shreveport, Louisiana, who picks up Trashcan Man on the road to Vegas.
The Rat Man

A girl whom Nick and Tom briefly run into on their way to Nebraska.
Barry Dorgan

The cook at the MGM Grand Hotel after Flagg takes over.

A gate guard at Project Blue. Campion is Patient Zero for the virus and unwittingly spreads it to the rest of the world.
William Starkey

The commanding officer of Project Blue and the man initially in charge of the military coverup.
Len Creighton