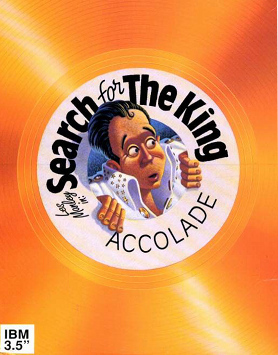 Cover for Search for the King.
Advertisement:

An Adventure Game series created by Steve Cartwright and published by Accolade. The series consists of two games; Les Manley in: Search for the King and Les Manley in: Lost in L.A.. They star Lester P. Manley, a pathetic nerd similar to (and clearly inspired by) Leisure Suit Larry.

In the first game Les is a nerdy menial laborer for a floundering TV station who decide to attract some attention by staging a contest for people to find Elvis Presley...sorry, "THE KING". Les sets out during his lunch break to try to win the contest to impress his boss's secretary, the beautiful Stella Hart.

In the sequel Les is called into action when his friend from the first game, Helmut Bean and Helmut's model girlfriend, are kidnapped.