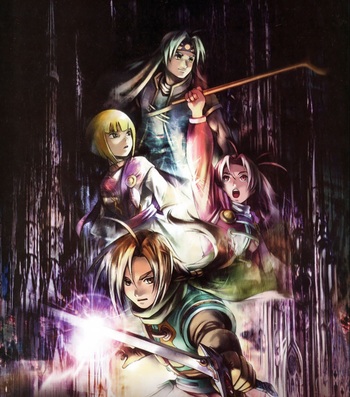 From top: Piers, Sheba, Jenna, Felix
"Ages ago, or so the stories tell, the power of Alchemy ruled over the world of Weyard..."
—Prologue of Golden Sun: The Lost Age
Advertisement:

The sequel to Golden Sun, Golden Sun: The Lost Age is the second game in the Golden Sun series and picks up the story in the immediate aftermath of the events at Venus Lighthouse. In doing so it changes the viewpoint to that of Felix, one of the enemies from the first game, and has you trying to release the same power you wanted to keep sealed in the first game, for equally good reasons. With Saturos and Menardi dead following their battle against Isaac's party atop Venus Lighthouse and Alex being rarely around to boss them around, Felix has to rally fellow "hostages" Jenna, Kraden, and Sheba in continuing the quest of their own accord. Sometime later, they rescue a mysterious sailor named Piers who volunteers to be part of the team in their quest, rounding out the Four-Element Ensemble.

This game expands on the established gameplay features, increasing the Djinn capacity and Summon counts. Item Crafting is introduced where the player can send forging materials to a blacksmith so that he can create useful equipment out of it. The Lost Age also introduced superbosses, powerful enemies that can only be accessible very late game and provide challenging battles in return for valuable rewards. The characters get to explore the rest of Weyard not covered by Isaac's party, which were previously inaccessible back in The Broken Seal, with the areas from the previous game almost entirely blocked off* There is a hidden path with a minor glitch that will let you get access to the map of the first game's subcontinent. All of that game's towns and locations are present on the overworld, but are inaccessible..

The Lost Age is succeeded by Golden Sun: Dark Dawn on the Nintendo DS, which takes place 30 years after the events of this game.