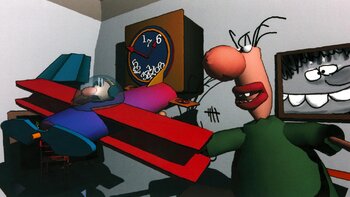 La Salla is a 1996 animated short film directed by Richard Condie, and produced by the National Film Board of Canada.

A bizarre man sits in a bizarre room and does bizarre things. He has a little cannon, which he uses to fire toy cows into a painting of a rural pasture—why not? He also makes bizarre wind-up toys, like a bottle with eyes and a mouth that babbles random nonsense, a fish on wheels, and a toy airplane that actually flies, with the toy pilot inside screaming nonstop. And if that isn't weird enough, the whole cartoon is a parody of opera, with the man singing in Italian.

The man's doorbell, which is a demon's head that holds out an apple because why not, rings. The man comes to the door and opens it, and his head is knocked clean off. That doesn't stop the head from singing, however.