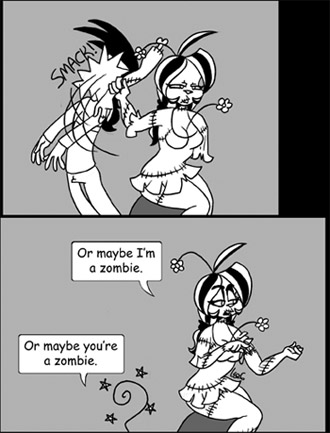 some people aren't easily convinced.
Sexy Mike: So what did you two learn on your zombie vision quest?
Daisy: Being a zombie sucks!
Advertisement:

is a webcomic by Lindsay Smith. The series is about the titular Daisy who was transformed into a zombie by a bolt of lightning from a mystic storm cloud that hangs over the local cemetery. She is joined by Elwynn who was also transformed into a zombie by the same storm cloud (although he started as a human when they first meet). The comic follows the two as they try and adapt to their sudden change, keeping their cannibalistic zombie urges in check, finding a place in the world and hopefully the cure for zombification.

They are somewhat impeded in their quest by the insane panty-obsessed Courtney who holds control over the massive family fortune that rightly belongs to Daisy. Daisy and Elwynn do manage to get what they need to get by in no small part due to Treelily Sunriver the resident Hippy/5th Level Pink Mage and her boyfriend Sexy Mike Flowerbed.

Daisy Is Dead provides examples of: