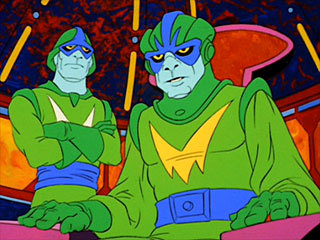 The Orions discussing how they can possibly keep their race's neutrality.
Choriocytosis - a nuisance to humans, fatal to Vulcans. When Spock is rushed to the sickbay after fainting on the Bridge, Mc Coy makes the dreaded diagnosis.The First Officer's only chance of survival is a rare drug - strobolin. Kirk pulls all the strings he can, but even then, the best he can arrange is to have the medicine delivered to them in three days' time - cutting it pretty close, considering how long the seriously ill Vulcan has left to live. While Spock's condition steadily worsens, the cargo ship that was to deliver the strobolin to Enterprise is ambushed by Orion pirates.With the game changed by the introduction of this new wild card, the Enterprise crew is forced into a desperate chase after the pirates. Pirates who have an even more desperate reaction to getting caught...