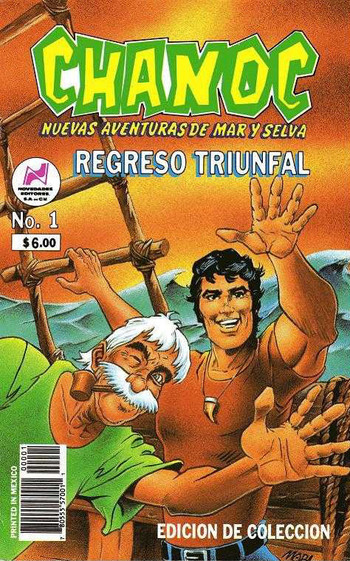 "Godfather, this is MY comic!"
Advertisement:

Chanoc is a fictional Mexican hero who starred in his own series of comic books and movies.

Created in the 1960s, he was originally a Tarzan rip-off, but his series soon veered into more modern adventures and then into absurdist comedy, which is what they became best known for.

Chanoc (this name, and other unusual names in the series, comes from Mexican Indian dialects) was a young man who grew up in the Mexican jungles and could kill even Jaguars. Eventually however he was found by a kooky old man named Tsekub who claimed that he was Chanoc's "godfather" (a claim Chanoc himself didn't fully believe) and who brought Chanoc with him back to civilization. Civilization, in this case, being the fishing village of Ixtac, where Chanoc settled down to live as a fisherman... but could not help running into crime and adventures all the time: maneating sharks or jaguars, smugglers, and such.

As time passed however, the focus came to be more on Tsekub and the rest of the quirky populace of Ixtac. These included: Pegleg, a one-legged man who was Tsekub's best friend/rival; a pair of bumbling tribesmen who wanted to eat Tsekub (and only him!); a pair of really fat women who wanted to, err, have their way with the old man as well; a Witch Doctor (complete with African-style mask that hid nearly his entire body) who crazy magics caused a lot of bizarre stuff; and several more. The stories also became more and more incredible, to the point that once a *robot* joined the cast!

The series was also noted for its many sport-based adventures, including Baseball, Football and Soccer; the Ixtac gang never failed to win at whatever they tried.

Chanoc and company became very popular, and the character even starred in a couple of movies, including a crossover with another popular Mexican hero, El Santo.