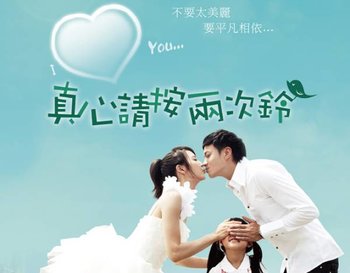 For Love Please Ring Bell Twice is a 2011/2012 Taiwanese production, which broadcasted on CTS Network.
Advertisement:

The story begins in 2003, during the height of a influenza epidemic. Zheng Xiao Xiang gets trapped in a broken elevator with a mysterious man. He calms her nervousness, and ultimately helps her out of the elevator. Since they are both wearing masks, and did not exchange names, neither knows who the other one is. In the confusion after being rescue, Xiao Xiang faints, causing a bystander to rip off his mask and peform rescue breathing. Next thing you know, she is quarantined in the local hospital after contracting the CIV virus from her would-be rescuer.

An intrepid reporter, Ren Jia Kai, has entered the quarantined area with the task of documenting the human cost of the epidemic. He meets up with Xiao Xiang and recognizes her from the elevator. He is, of course, the guy from the elevator, but, fully gowned and masked, she doesn't recognize him.

They fail to follow up on the sparks in elevator and go their separate ways.

Eight years later, she is a single mom. Her long-term boyfriend Ke Jie, who was the one who infected her with the CIV virus, has broken up with her and moved out. Jia Kai has become the CEO of a high-end public relations firm. Through a series of fateful mishaps and events, they meet up again. Can lightning strike twice?