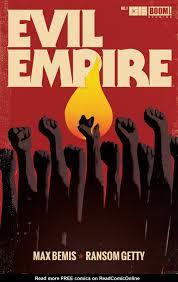 "How could we actually end up in a jacked-up dystopian future...starting from exactly where you are, right now? You wanna know the truth? Cuz I of all people can certainly fill you in on who's responsible. It was you, you useless prick. You did it."

This page is for the comic book Evil Empire. For the trope, see The Empire.

A twelve-issue comic series originally published in 2010-2011, Evil Empire tells the story of the evolution (devolution?) of American society after the murder of Courtney Laramy, wife of presidential candidate Senator Laramy. The senator reveals that he killed her while giving a press conference, and declares that society would be better if everyone just did whatever the fuck they wanted, whenever they wanted.

When he gets shot, things go from bad to worse and we see how an actual The Empire would and could come to be.