Literature / Whispers From The Dead 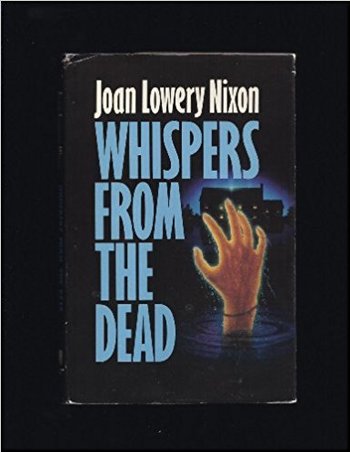 One of the few overtly supernatural works written by Joan Lowery Nixon—most of them either have only vague hints at something otherworldly, sometimes only due to the publishers' blurb (The Other Side of Dark), or what at first is played up as supernatural turns out to have an ordinary if chilling explanation (The Seance, A Deadly Game of Magic). But this one, while it could be dismissed as only being the result of a Near-Death Experience and really just about solving a sociopath's murders, is made very clear at the outset via the first-person perspective to involve a true haunting and psychic experiences. note Other examples would be The Haunting, Haunted Island, and The House on Hackman's Hill.

Seventeen-year-old Sarah Darnell, after her family moves to Houston as part of her father's promotion/company transfer (and, though no one will say it outright, to help escape the aftereffects of her drowning), discovers that their new house—expensive and lavish but available at a startlingly low price—was the site of a grisly murder two years before. What wasn't expected, however, was that the Psychic Link she'd accidentally forged with the Other Side would draw in the ghost of a victim seeking justice and a chance to rest. As Sarah attempts to balance fitting in and making friends in her new community, dating a handsome older acquaintance, and keeping her parents from learning the truth of her supernatural experience, she must find a way to communicate with this ghost and solve the mystery...before those who don't want it solved make sure she, too, is only a whisper from the dead.