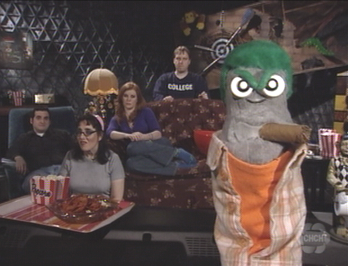 This Movie Sucks is a TV show hosted by badass sock puppet Ed the Sock and semi-famous cosplayer Liana K. Every week, along with comedians Ron Sparks, Andrew Young and (infrequently) Charlene Zacks, they review horrible movies with a barrage of sarcasm and wit.

The show follows a Dinner and a Movie format. For the movie review, we are treated to Ed and co. in their studio set, where they discuss/mock what they saw in the previous segment. Then, we are shown the next segment of the film itself, laced with sarcastic comments by Ed and co. throughout. Finally, cut to another minute or so segment in the studio, commercials, rinse and repeat.