Literature / The Life and Opinions of the Tomcat Murr 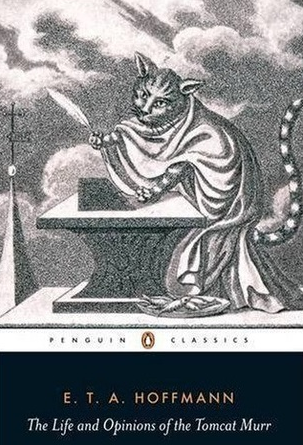 "Shy - with a trembling heart, I hand over to the world some pages of life, of suffering, of hope, of longing, in sweet hours of leisure, of poetic inspiration streamed from my innermost being."
—Murr (Étudiant en belles lettres) in the foreword of his autobiography

The Life and Opinions of the Tomcat Murr, together with a fragmentary Biography of Kapellmeister Johannes Kreisler on Random Sheets of Waste Paper is a Romantic novel by E. T. A. Hoffmann, written in two volumes (a planned third part wasn't finished due to Author Existence Failure) in 1819 to 1821.

The book is a deliberately over-the-top parody of the genius concept in Romanticism as well a satire on the highlife of Hoffmann's time. Its unusual form consists of two biographies sliced into one: the autobiography of the pretentious Tomcat Murr, and the biography about the genius musician Johannes Kreisler, whose servant Master Abraham is the owner of Murr.

Animal Tropes brought to you by the genius tomcat Murr: