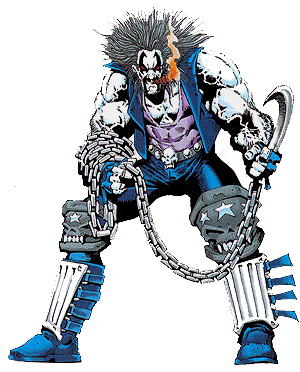 Listen up, dweebs! Seein' as how I'm me, it's time I gave ya the real lowdown on the Main Man.

Name's Lobo, and I kill people. That ain't my real name, by the way — you dweebs can't pronounce it, but it translates to He Who Devours Your Entrails And Thoroughly Enjoys It. I'm the best fraggin' bounty hunter the galaxy has to offer — ferget the guy in the potbowl helmet. I grew up on a rock named Czarnia, which was full of dweebs. So when I took chemistry in high school, I mixed up somethin' special to show 'em how I really felt. Fragged every last one of them for that year's Science project, gave myself an A. Anyways, afterwards I got hold of a chain and hook, and a nice bike, and I've pretty much been boozin' and fightin' my way across the galaxy ever since.

Some of the nerds around here might try to tell ya I'm some sort of parody of a '90s Anti-Hero, but try laughin' at the Main Man and I'll blow yer head off. In any case I predate most of them, first appearing in Omega Men #3 (June, 1983), The Dark Age of Comic Books where those guys became standard didn't start for about another three years. Records of my life turned up in my own 4 issue mini-series (November, 1990-February, 1991). The readers seemed to love it, as more mini-series turned up and sold well. I next got my own regular series which lasted for 64 issues, from December, 1993 to July, 1999. Not that I ever stopped appearing in the pages of series named after other guys.

I also had my own webseries which chronicle my fragging awesome adventures throughout the galaxy. Like my comics, it's not for fraggin' youngsters or old timers.

Other'n that, I'm pretty much what I look like. Except that time they merged me with a duck. 'Would've made more sense to use good ol' Deadpool, but he wasn't a big name yet. Oh, and I like dolphins but I hate space penguins. What, ya think that's funny? Waitaminnit. There, here's yer spine back.

The New 52 has taken its toll on my glorious self by making me conspicuously unglorious. Those bastiches turned me into a nancy boy

Well whattaya know, the Main Man is finally back for that Rebirth thing! Somehow I'm startin' off as part of Bats' own take on the Justice League, but either way, I like where this goin'. Come to think of it, turns out a bunch of the 52 guys aren't really who they're supposed to be, whether they'd be from other places or someone's cousin. Wonder if this'll explain that nancy boy bastich and it'll mean I get to frag him? Can't wait to find out. Okay, so right now he's stuck in a bottle that the Green Lantern Corps decided not to break open. Not bad, but let's see what'll happen next.

Also, it turns out that I kind of have a daughter who was part of the Teen Titans. Welp, at least she can help me when I'm stuck in prison again.

Oh, and, I finally made it to fraggin' official live action! It's only in that weird show about Supes' planet for now, but I'm sure those dweebs from Warner Bros. will find a way to bring me to the big fraggin' screen, someday! Better have James Gunn or Rob Zombie to direct my movie, not fraggin' Michael Bay.

Well, looks like I'm done here, so I'm off to frag some sort of bounty out there, or maybe around your own place. After all, someone pays me to get the job done...and the Main Man always delivers!