open/close all folders
The House Robots

BattleBots had numerous deadly hazards strewn across the Battlebox where robots fight. In Robot Wars, they did something a little different: they made their own fighting robots and sent them in as rolling hazards. Typically there were two or three House Robots that would normally stay in what were called CPZs, or Corner Patrol Zonesnote called PPZs or Perimeter Patrol Zones in Series 2 during matches. If a robot was pushed or wandered into a CPZ, the House Robots could have their way with them until they got out. When one robot was counted out, however, the vanquished was fair game for the House Robots, mostly to keep things entertaining for the crowd.

Occasionally competitors would get into exhibition battles against the House Robots themselves, and some even picked fights with them during normal matches, often ending in hilarious, embarrassing, or amazing results. 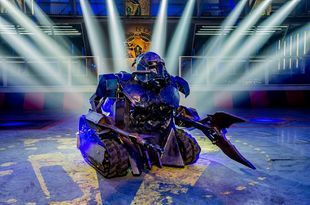 "Imagine finding him in your laundry basket!"
Click to see the classic series Sir Killalot

"Our master of disaster! Two hundred kilos of doom and gloom, the lance to chew, the hydraulic lance to cut through. A nip and tuck - and you're out of luck!"

The largest and heaviest House Robot until Mr. Psycho came along, Sir Killalot was an unstoppable House Robot powered by a petrol-powered engine. Its armaments were a claw that was originally used for a fireman's Jaws Of Life tinkered with to grip and let go faster than a normal set, a hybrid lance-drill and its sheer weight, often coming in at five times as heavy or heavier than show contenders. While Killalot is one of the most recognizable House Robots, he was not one of the original four created for the very first series. 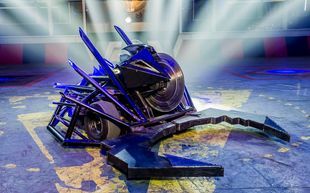 "It's like watching a surgeon at work, only with less blood, more sparks, and absolutely no medical qualifications!"
Click to see the classic series Dead Metal

"Dead metal is what you'll become: torn, twisted robo-remnants if you get caught by the pneumatic pincers or trapped by the 3000RPM circular saw!"

One of the House Robots featured on the show since its very first episodes, Dead Metal resembles a lobster/scorpion hybrid. He is designed to use two weapons in conjunction with one another: a large horizontal claw that can grab a robot and keep it from driving off, and a compact circular saw that was on an extending arm that could be pushed in and grind down an opponent. Because of these unique characteristics, Dead Metal got far more hazardous whenever other House Robots or competitors got involved with whatever it was attacking. 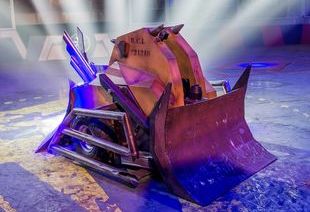 "If he were a car, he'd be a tank!"
Click to see the classic series Shunt

"Shunt is the lightest of our House Robots at a hundred and five kilos, but quick and maneuverable! It can bulldoze, or with the fearsome axe, Shunt will blunt the brightest of hopes!"

Another House Robot present since the first series, resembling a miniature construction vehicle, Shunt was something approaching the closest match to competing robots as the years went by since it was so similar in weight. This also meant Shunt was also a popular target for competitors to attack during matches, culminating in it getting most of the flak in Series 7. 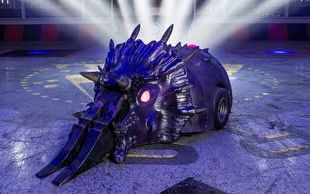 "This is no Waltzing Matilda, but if Matilda dances with you, it's a dance of death! Her tusks can rip and pneumatically flip, it's a breeze for Tildy! Her spinning rear flywheel is twenty-seven kilos in weight, the Matriarch of Mayhem, the Mistress of Mischief, Matilda!"

A two-wheeled sort of hybrid between a triceratops and an armadillo, Matilda was the third of the original four House Robots. Like many of the other House Robots, Matilda became notably tougher in later series to keep up with the higher-level competitors fighting for titles. Good thing too, because Matilda was also often attacked by contenders, more so than any other House Robot.

"Certain to leave all opponents... hot under the collar!"

"Sergeant Bash is on parade, with the long-range flamethrower and the punishing pair of pincers! A machine of war, it obeys no law!"

The fourth and final of the original House Robots, Sergeant Bash unsurprisingly resembles a military machine of some sort. It carried multiple weapons over its career, the most memorable combination being a crushing claw up front and its turret-mounted flamethrower. Any robots noted for their flammability would often find themselves in the ring with Bash as one of the house robots - Diotoir was a repeat victim of Bash, if not the arena hazards.

"Six foot two, eyes of blue, Mr. Psycho's after you..."note Mr. Psycho was closer to 5 feet and had yellow eyes

One of the new House Robots introduced in Series Six, Mr. Psycho was the largest House Robot ever seen in the show's entire run. Very similar to Sir Killalot in that Mr. Psycho was a super-heavy House Robot with a vaguely-humanoid appearance, with a head, torso and two arms, one being a crushing claw. Unlike Killalot, Mr. Psycho was armed with a 30-kg hammer and powered by electric motors rather than a petrol engine.

Introduced in Series Six alongside Mr. Psycho as his Canine Companion, Growler is a robotic attack dog, and an extremely fast robot weighing in at over 300 kg armed with a hydraulic jaw made from industrial digger steel. Functionally Growler was similar to Shunt, albeit more than three times as heavy and without the pneumatic axe.

The last House Robot introduced in the series prior to its cancellation, debuting in the seventh season. Designed to resemble a cartoony, robotic boxer, Cassius did not have much time to shine, but showed off his pneumatic, fast-moving fists when he could.

Refbot's history started with a previous robot, Shove. Shove was a backstage House Robot used to push incapacitated or destroyed robots out of the arena and back to their owners. When Refbot was introduced in Series 4, he was also used in this role, although Refbot also acted as an in-arena referee and something of a rolling safety device: it was also equipped with a fire extinguisher to control blazes before they spread to the whole arena (a role previously filled by human safety crew), and in later series was also used to declare immobilised robots officially 'out' and stop the house robots from unfairly interfering with a card system.

A short-lived element of the show added midway through Series 2, the Sentinel was a modified JCB arm which is regarded as an "unofficial" house robot, its primary purpose being an additional hazard in the Gauntlet (although it also appeared in the corner of the Perimeter Patrol Zone in the Series 2 Grand Final and the Grudge Matches special). 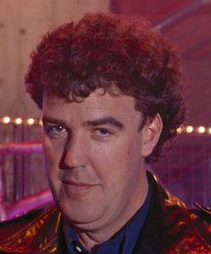 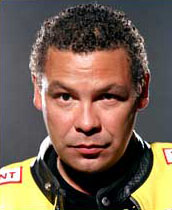 The Master of Mayhem himself. 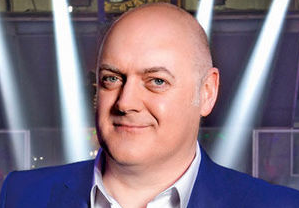 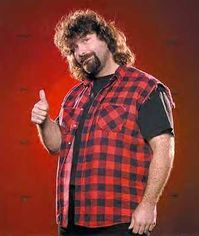 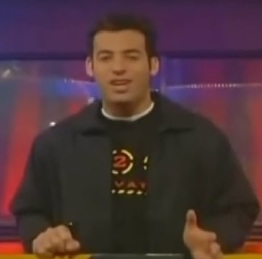 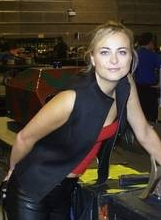 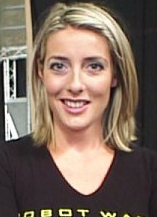 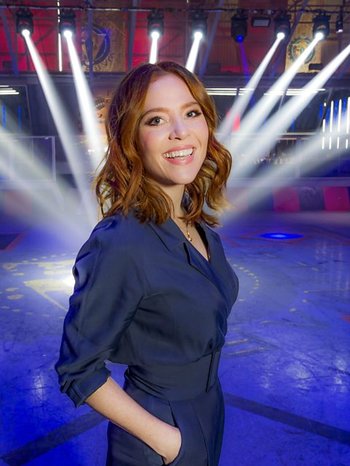 The Mistress of Mayhem. 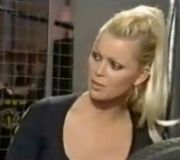 The voice of war. 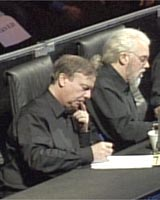