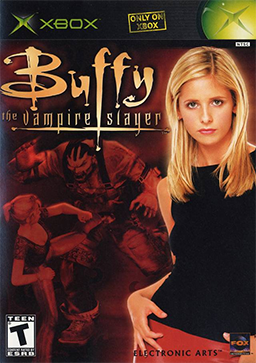 If you ever wanted to be Buffy, now's your chance.
Advertisement:

A video game for the Xbox was released in 2002, featuring all the Buffy the Vampire Slayer cast save Sarah Michelle Gellar, taking place between the third season episodes "Revelations" and "Lover's Walk" (the gang knows Angel's back, but Xander and Cordelia are still together). It centers on yet another bid to revive The Master, with Spike being forced to help because Dru is held hostage. It was followed by a sequel, Chaos Bleeds, which has slain foes Back from the Dead as Ethan Rayne challenges The First Evil to a contest, using The Scoobies as his champions in a bid to become a chaotic god.

Between the two games we find the following tropes.