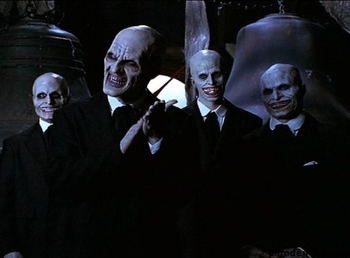 Can't even shout...Can't even cry...The gentlemen are coming by...
Doctor: Do you know where you are, Buffy?
Buffy: [confused] Sunnydale.
Doctor: No, none of that's real, none of it. You're in a mental institution. You've been with us now for six years. Do you remember?
— "Normal Again"
Advertisement: