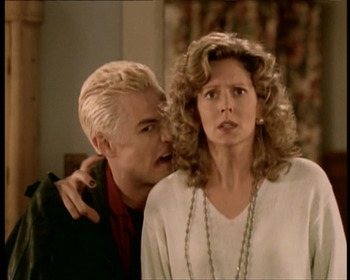 "You're not invited!"
"I wear the cheese. It does not wear me."
— The Cheese Man, "Restless"
Advertisement:

The series known for epitomizing Buffy Speak and showcasing some truly zany Monster of the Week plots is naturally bound to feature some hilarious episodes of television.

"Band Candy" (3x06)It would be easier to name the moments in this episode that were not laugh-out-loud funny.

"Doppelgangland" (3x16)We may as well reiterate the same disclaimer from "Band Candy."