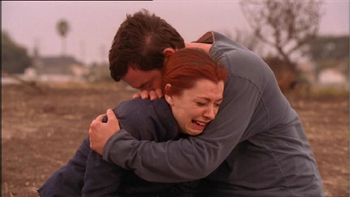 "I love you, Willow."
"Let me tell you something. When it's dark, and I'm all alone, and I'm scared or freaked out or whatever, I always think, 'What would Buffy do?' You're my hero!"
— Xander Harris, "The Freshman"
Advertisement:

While some of the trademarks of Buffy the Vampire Slayer are its witty Whedonesque dialogue and the shattering Tear Jerker moments that befall the people of Sunnydale, one of the things that also makes it special is the bedrock of support that its characters offer each other time and time again.

Some of the great Heartwarming moments include: