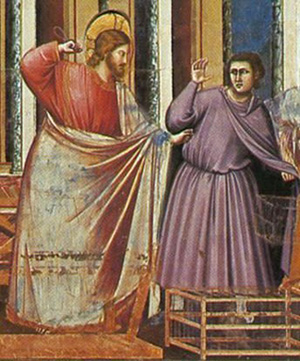 Don't make me get my Father.
"Batman does not eat nachos!"
— Batman to another Batman (who continues to eat the nachos) in a rare double example of this trope, Batman: The Brave and the Bold
Advertisement:

As any writer will tell you, there are times when drama, art, and normal human behavior are not just at odds, but in a Mexican Standoff waiting for the others to blink before blasting each other as doves flutter by in slow motion.

Sometimes the characters are stuck and unable to move forward, and the author doesn't feel comfortable dropping in solutions via Deus ex Machina or having a guy barge in with a gun. Other times, there's a great set up for a joke but no one present is snarky or smart enough to say it. There is a solution; it simply requires that one or more characters act outside their established character for just a moment.

Enter the Out-of-Character Moment. Whether it's one of the various Ball Tropes, Contrived Stupidity Tropes, Improbable Behavior Tropes, or Poor Communication Kills, a character gets Character Derailment for a scene and allows the plot to move in the direction the author wants. Generally, the creator themselves will acknowledge they forced their character's behavior in some way, though it's not quite as damaging as Character Derailment, especially when it results in the natural progression of the plot.

If this happens in a comedic situation, especially if the character is being nicer or more responsible than usual, another character is likely to lampshade it by asking, "Who are you, and what have you done with X?"

Quite often, it is a very fine line and difficult to notice in the first place, such as the difference between a Deadpan Snarker and The Comically Serious. At other times, with a Five-Man Band or other ensemble group characters, they are often shifted around to better fit into a team dynamic when they are used to being alone or in a simple partnership.

Speaking of natural growth, this Out-of-Character Moment may be expanded on as Character Development (for examples of this, see OOC Is Serious Business). If they are being pushed beyond their comfort zone, they may act differently than normal, but somehow they find their own way to survive. After all, not all character growth is predictable or linear.

This can be Truth in Television; real people will not always behave in the most expected way, and indeed, it is unrealistic to expect a fictional character to behave any more consistently. Depending on the general circumstances, immediate situation, and who is around, the mildest individual can just snap. This is related to the Fundamental Attribution Error,

in which people tend to place more of what they expect from someone on their personality than the situation.note The fundamental attribution error is a flaw in human thinking which causes us to ascribe a person's actions entirely to personality. If a customer snaps at you while ordering coffee, they are excused by situational factors: woke up on the wrong side of the bed, fought with their spouse, dog puked on the floor, etc. If, however, you snap back at them while taking their order, it's not because your father verbally humiliated you or you ran out of gas on the drive over or some pissy customer is being rude to YOU — it's because you're a jerkass, end of story.

And this is also a reminder that true Character Derailment isn't merely one instance of "I don't like what they did."

However, said character may tell his/her peers not to get used to it, as he/she may intend on making said character-breaking moment a one-time thing.

Contrast Alternative Character Interpretation. See also Character Exaggeration and Characterization Marches On. Possibly caused by a Writer on Board.

Can be considered a Super-Trope to pretty much the entire Ball Index.